San Francisco Bay is a mecca for sailors and home to a major port. From small boats to military ships, these waters have seen it all. One company, who began by repairing wooden ships in the late ‘70s, has grown to become one of the most recognized build-and-repair names within the commercial vessel industry: Bay Ship & Yacht Co.

In 1977, Bill Elliot began Bay Ship with the intent of working on wooden ships, his primary passion. As opportunities arose in the commercial and military vessel market, Elliot decided to fuel that passion and opened a shipyard on San Francisco Bay in 1994 and has grown and developed it into the “21st Century Shipyard”.

David Ashton, Sales Manager at Bay Ship, began working at the company in 2008 and has since seen the business steadily increase.

“It’s been very fun and exciting to be a part of a company that has undergone so many significant and positive changes. [Bay Ship] has embarked on [various] programs because it believes so deeply in our mission statement of ‘Absolute Customer Satisfaction,’” said Ashton.

The programs Ashton referred to include the investment in a new drydock; expansion of the machine, fabrication, and hydraulic shops; and the development of a new quality management system to ensure continuous improvement.

Bay Ship’s singular priority is safety and protection of our customers’ vessels. By ensuring a safe workplace, Bay Ship can ensure that projects are conducted efficiently and to the letter of the contract.

“For nearly two years [Bay Ship] has invested in a Quality Management System (QMS),” said Ashton. “The QMS is geared towards business improvements, but it’s most significant contribution is ensuring that our business processes are such that we can ensure we provide the highest quality of work and work fulfillment to our customers; while providing the safest environment for our employees.”

The QMS system ensures procedural fulfillment through a series of checks and accountability. It also exploits problematic areas to determine the root causes and the corrections thereof.

“Safety starts with understanding the scope of work and planning for it,” added Ashton. “Our culture that we have developed at [Bay Ship] is such that any person, anywhere in the company, can stop a project if they feel that an unsafe practice is occurring; so we spend lots of time ensuring that it never gets to that.”

Beyond safety, Bay Ship makes certain to take care of the land and waters they work on, as well.

“[Bay Ship] is located on the San Francisco Bay and as such we are extremely sensitive to ensuring that neither the air, land or water is polluted,” said Ashton. “[Bay Ship] goes through great detail of ensure that we are as environmentally sensitive as we can be, including environmental containment and shrouding of vessels during certain operations; the recycling of petroleum waste products; the recycling of various metals; and our waste stream is segregated to maximize environmental sensitivity.”

“Recruiting of smart people to carry out the work is very important if we are to remain a cutting-edge 21st century shipyard,” says Ashton.

As a complex organization that requires skilled individuals from project to business managers, Bay Ship has developed its own extensive training program for new hires.

“It’s quite unique to our shipyard,” said Ashton. “We work in multiple disciplines and each discipline requires its own training … We bring in outside vendors, safety consultants, and others to conduct training of our workforce for specific actions, but have an extensive in-house training staff for our routine education.”

“To my knowledge, the training program at [Bay Ship] is unique among all shipyards,” added Ashton. “Where other shipyards have some training, our training is so extensive it has earned a renowned reputation worldwide.”

Bay Ship’s staff is proof to the theory that with the right people, you can reach success anywhere.

“The most important aspect of managing a workforce is empowering them to be a part of their own future,” said Ashton.

Looking to the Horizon

Bay Ship & Yacht Co. has worked on some impressive projects. From the legendary U.S. Navy battleship USS Iowa to the presidential yacht the Potomac, Bay Ship is anchored in its mission of delivering top quality work and customer satisfaction.

“[The year] 2015 should be a great year for [Bay Ship] and our customers,” said Ashton. “Every time we re-invest in our company, our customers benefit from it. We continually try to improve because it’s the right thing to do for our employees and our customers.”

One thing can be known for sure about Bay Ship’s future, this company is one that is setting its sails towards a grand voyage. 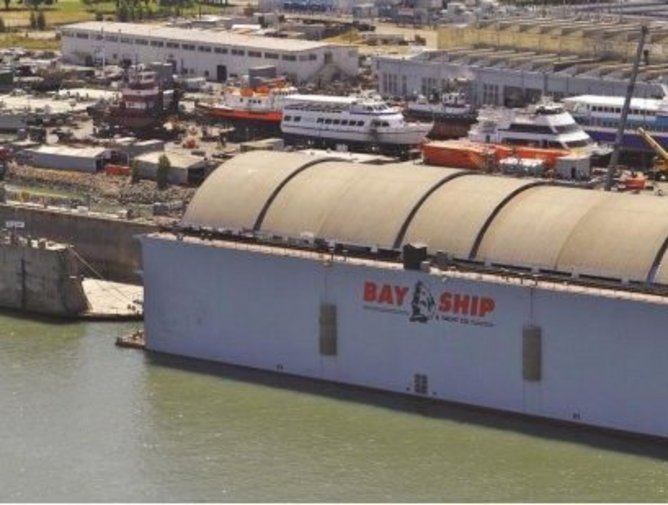