As years progress, even the most solid infrastructure begins to show signs of wear and age. This was the case with Cleveland’s I-90 Innerbelt Bridge, which carried thousands of commuters and goods across the Cuyahoga River every day. Built in 1959, the truss bridge began to succumb to corrosion and structural deterioration. After studies to determine the best course of action, the Ohio Department of Transportation made the decision to demolish the existing bridge and replace it with twin bridges to usher eastbound and westbound commuters with unprecedented efficiency. With the westbound bridge already built, the joint venture group Trumbull-Great Lakes-Ruhlin (TGR) was selected to move forward with a design build plan for the eastbound George V. Voinovich Bridge Project.

The project at hand

Trumbull-Great Lakes-Ruhlin joined together in 2013 to commence work on the Innerbelt/George V. Voinovich Bridge Project, along with designer URS who designed the new bridge from ODOT’s concept drawings. The project consists of two key parts: demolish the original existing bridge, and rebuild a new bridge in its place, owned by the Ohio Department of Transportation. With demolition complete, the project is now in its building phase, constructing a 4,000 ft bridge in a Delta Girder style.

“Its primary design—the main span over the river and the valley—is 2,800 ft long,” says Jason Tucker, TGR construction project manager. “It is a 10-span structure that is a Delta Girder modified design. It will be five lanes and with full shoulders, so it’s about 100 ft wide. The approach span is a four-span conventional girder bridge with similar width, and the length of that is 1,200 ft.”

The bridge delivers motorists to Cleveland’s busy Central Business District, while the approach side travels near the homes and businesses of the Tremont neighborhood. Construction on each side commands its own challenges, as do the slopes of the Cuyahoga River itself.

“Another part of the reason we replaced the 1959 bridge is that the foundations didn’t go down to bedrock on the original structure,” says Adam Belasik, TGR project manager. “We changed that on this bridge so that we could secure it to help stabilize the slope.”

To guarantee quality, TGR and the Ohio Department of Transportation have contracted a third party on site to keep a watchful eye on developments. “The monitoring contractors have two masters, so to speak—they worked for us and also worked for ODOT. They are out there independent of us, but they monitor everything that goes on and document all the testing, et cetera for the owner,” says Belasik.

Along with ODOT watching over the project for quality assurance, many eyes on the project promise a meeting of high standards at every point of construction.

“Safety is key to everything,” says Tucker. “The success of a job is to do it safely—and if you do it safely, you’re going to do it efficiently and with a high level of quality as well.”

Safety is top priority on the Voinovich Bridge Project. Similar to the firm on site to monitor quality, TGR also appoints staff devoted to the upkeep and consistency of safety measures throughout the project. “The joint venture has two onsite, full-time safety supervisors. They act as support for the crews out there to get them the tools they need, the equipment they need to do the job safely,” Tucker continues. He notes that the joint venture heavily promotes meetings and programs to ensure that all staff are emphasizing safety whenever possible, from daily analysis with foremen to monthly all-hands-on-deck discussions.

“On top of that, we are charged with a safety snapshot program,” says Belasik. “We do a certain amount of just stopping to look at an operation and follow a checklist of: are our workers wearing proper safety equipment? Are they operating the equipment properly? Are they in the right locations? Each person on the job has to complete a certain amount of snapshots each week, and our safety folks compile that information to determine the more at-risk activities that are noted.” With these activities identified and examined, TGR is able to ensure safety for its workers, surrounding Cleveland citizens, and commuters using the bridge in the future.

A better bridge for Cleveland commuters

What’s in store for Cleveland once the Voinovich Bridge Project is complete? A much more comfortable and functional commute across the Cuyahoga River, starting with the promise of five full lanes in each direction plus two full shoulders and entrance ramp lanes to facilitate the flow of traffic onto the bridge.

“The existing bridge had four lanes in each direction and limited shoulders, so you didn’t really have a breakdown lane to pull off if something happened. We had daily backups on the structure previously, and it had short ramp merges to come onto the mainline. It was very difficult in rush hours for traffic to merge in, and it slowed traffic all through downtown corridor,” says Tom Hyland, ODOT’s project manager for construction. “We’ll have full lanes and dedicated entrance ramp lanes—so once the bridge gets in there, it will be full traffic running through to get in and out of downtown.”

The new bridge will also be outfitted with aesthetic upgrades, from historic renderings and plaques to plaza areas and aesthetic lighting that can be coordinated with the westbound sister bridge for holidays and events.

On track to be open to the public by October 2016, TGR’s joint venture project is paving the way for an efficient and more beautiful Ohio. 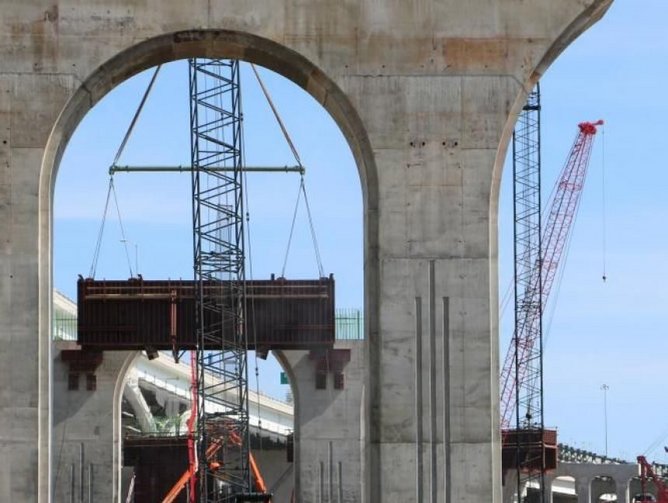 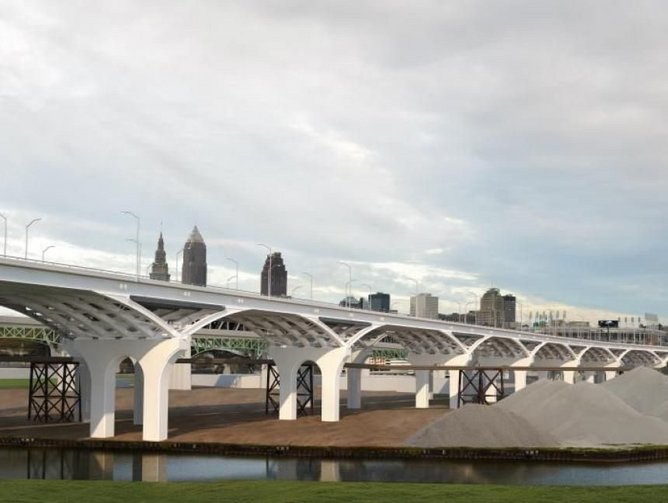 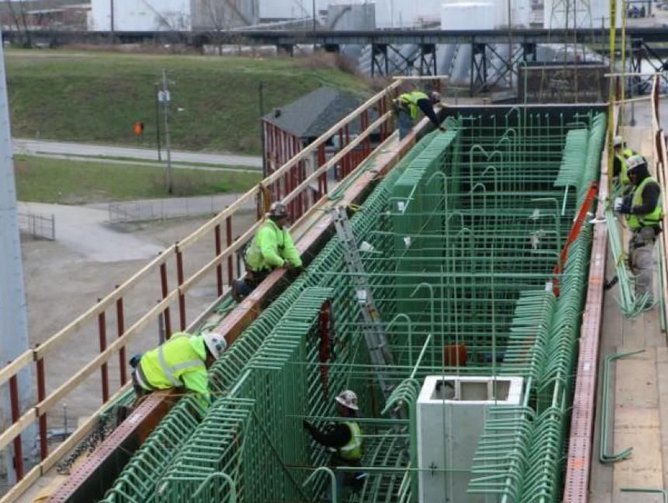 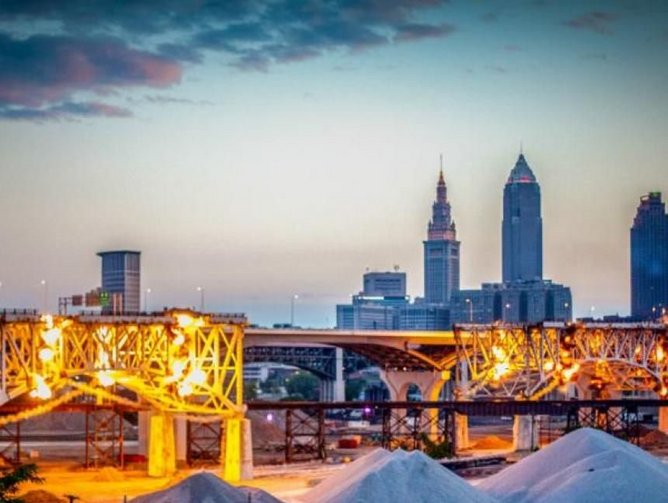 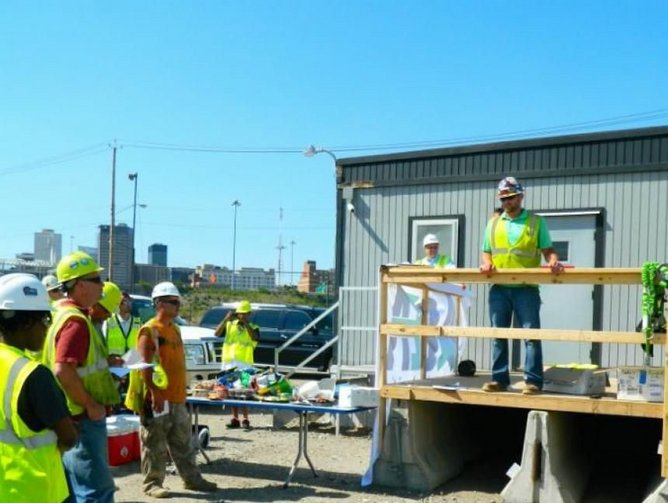 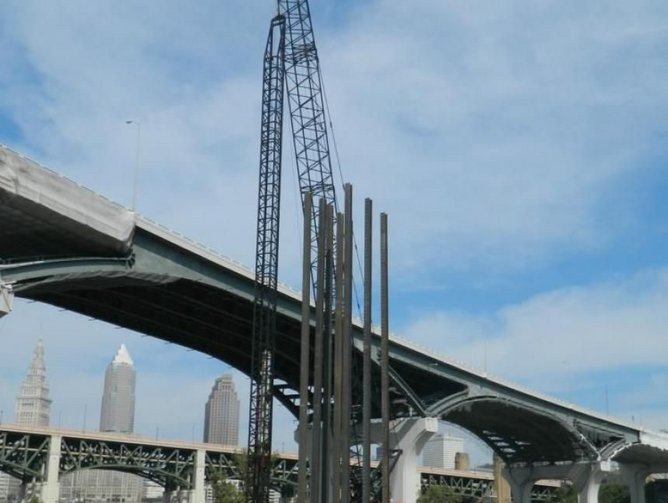 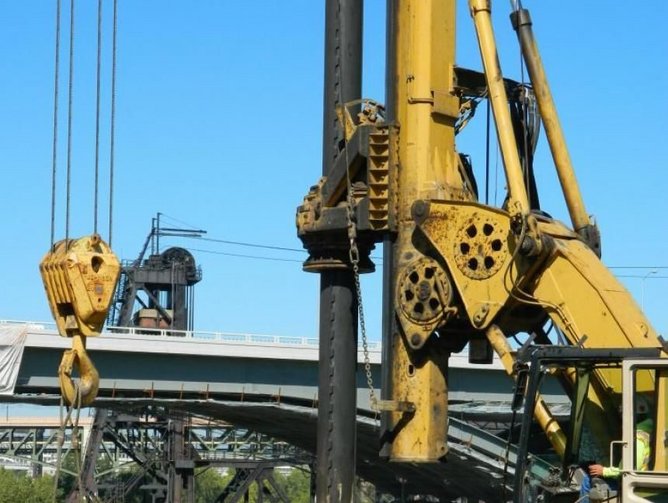 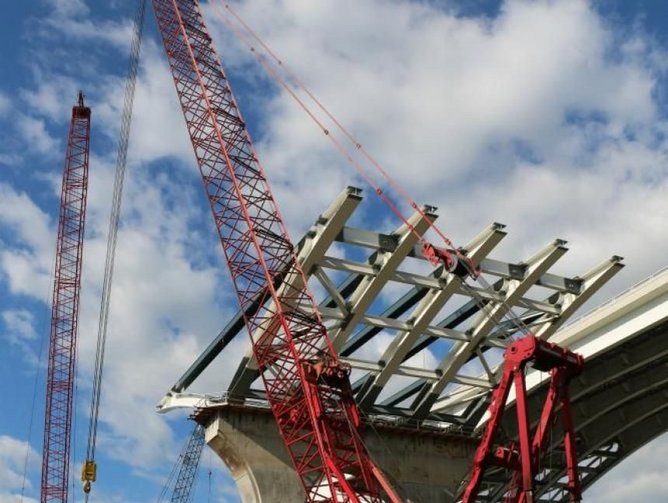