Keeping a large population supplied with clean, reliable drinking water is a complex business. The State of Oklahoma has a reputation for extreme and erratic weather, but the City of Norman, located around 20 miles south of Oklahoma City, averages about 38 inches of rainfall a year, so it is not exactly arid. All the same, it relies on a variety of different sources to satisfy the demands of an estimated 122,000 citizens.

In its earlier days, the city, which was first settled towards the end of the 19th century, relied on wells sunk into the Garber-Wellington aquifer, a large sandstone formation lying under central Oklahoma. By the 1940s, it became clear that the rapidly growing city would need to add more resources. City leaders decided to dam the Little River in 1965 and create 6,000-acre Lake Thunderbird to provide Norman and other communities with a dependable drinking water source of around 7bn gallons a year.

To date, these two sources - direct supply from the lake and 31 Garber-Wellington wells - provide Norman with almost all of its supply. However, since 2000 the city has had an arrangement with Oklahoma City to provide emergency connection and supply a base flow of 1mn gallons per day (mgd) when needed. Since 1988, when Norman first exceeded its allotted extraction, the water treatment plant (WTP) has exceeded its allocation 15 times. The demands on Lake Thunderbird have increased to the point that it cannot provide the City’s supply requirements on a continual basis, so the city is sinking an additional 12 wells into the aquifer to yield another two mgd. As Chris Mattingly, City of Norman Capital Projects Engineer explains: “We are out of reserves; we are treating all the lake water we are allowed to.” Currently the city is looking at innovative ways to re-use more of its water, including putting treated wastewater to good uses. For example, on an average summer's day the University of Oklahoma uses 500,000 gallons of treated effluent to irrigate its golf course.

The bulk of Norman's water supply is treated at the city's WTP, which was built in 1965. The plant was expanded in 1981, increasing its capacity from 7 to 14 mgd, and again in 2010, when the Phase I upgrade added a generator and a new clarifier, replaced the filter system, upgraded much of the electrical system and replaced lime slakers. Today it can deliver 17 mgd of treated water. However, as technology evolved and regulatory demands on water and process quality from the Department of Environmental Quality (DEQ) became more stringent, it became apparent that the City needed to look at a complete upgrade of the disinfection processes at the WTP. The City embarked on Phase II, a project that will see the introduction of ultraviolet light (UV) as the primary disinfection process, new ozone and chemical processes, a new pumping station and new administration and maintenance buildings.

The City has an interesting way of raising money for infrastructure, explains Chris Mattingly. “All of the citizens of Norman have to vote to approve any rate increase – not just the water users. We have to be very transparent, educate our public to make sure they are aware of all the issues and why we need the funds, and then we put it to a vote.” The case was set out in detail, based on a pilot study carried out by Carollo Engineers, a hugely experienced and highly respected consulting firm, and the $35mn project was given the go-ahead by the voters. Norman is borrowing $31mn at a low rate of interest that will save Norman ratepayers about $7mn for the construction phase of the project through a state fund administered by the Oklahoma Water Resources Board (OWRB).

Driving the design was the request of the DEQ to move to a more substantial disinfection process than the chloramine they were using as a primary disinfectant, says Mattingly. “We tried chlorine but that generates trihalomethanes (THMs), which are regulated and we were not sure we could meet those standards - so we ended up thinking about ozone. Then Carollo came up with the recommendation that UV would be the most effective as our primary disinfectant, with an ozone cycle to improve the taste and quality further.”

This will be the first use of UV in Oklahoma to disinfect a large WTP, though the technology has been used elsewhere, notably at New York City, which has the largest potable water UV treatment plant in the world. As Amber Wooten, Project Engineer at Carollo explains: “As part of the pilot study, we evaluated placing ozone at different points along the water treatment process. We found that ozone was not the best solution for disinfection, but that it offers some other benefits, such as taste and odor reduction. The combination of ozone and UV allowed the City to make the most efficient use of the treatment as well as the most cost-effective way to attain the levels they wanted.” The design is sophisticated. For example, the City had concerns that the introduction of ozone could interact with bromine in the water to form bromates. “We found that adding a little chloramine upstream of ozone reduces bromate formation.” says Amber. “The other interesting thing is that we converted the WTP's existing filters to biofilters to further enhance treatment with minimal capital cost. All of these processes work together to deliver the improved water quality that water users in Norman will see.”

The other key partner in the Phase II upgrade is the Foley Company, which has performed many water treatment projects and is constructing the new facilities. Foley's project manager, Dave Hoover, admits that although his firm has completed many downstream wastewater UV installations, this is its first on the water supply side. “In most wastewater installations the UV lights hang down in an open channel, and because the water is soiled you need a lot of them. What I like about this is that it is in an enclosed pipe, the water is clearer; so you can do it more efficiently and use less energy.”

The preliminary building excavation and piping rerouting has been completed and now the critical path for the project is through the Chemical/Ozone Building. “We are scheduled to install the piers soon,” Hoover says. “The soil condition is quite unstable, and Carollo has designed the facility with 104 deep piers drilled 11ft into the shale.” Teamwork between the partners is key. During construction, the plant has to run continuously. The longest period it can be shut down is at the time of lowest demand in the winter, when the city can be supplied for a maximum of three days using water stored in the city's storage towers and emergency supplies from Oklahoma City.

Geri Wellborn has been manager of the plant for the last year and is the first woman in Norman's history to manage a utility. She's looking forward to the challenges of running the new advanced facility. “I think it will change the way we operate. We are still waiting to hear exactly what the DEQ will require of us in the way of recording and reporting. UV hasn’t been used for disinfection in this state. But we have been busy making sure our operators understand that they are going to have a lot more options as to where they dose chemicals, how they monitor chlorine residuals, for example and not just making sure that the levels at the back and the front of the plant are correct but at points in between.” All of that data has to be collected, and it will involve a lot more quality and control testing for her team.

Much of this can be automated, but that too will involve staff training. New systems being put in place include an upgrade to the existing SCADA system, software for the filters and monitoring software for the UV and ozone circuits. Chemical feed systems dating back to the 1960s will be largely automated too, which will make life much easier for the operators once they get used to it, says Wellborn. All of this has been foreseen by Carollo. “As part of the construction process, the manufacturers are required to provide training on all of the new equipment, both operations and maintenance,” explains Amber Wooten. “Some of them are asked to provide longer term maintenance, giving staff the opportunity to continue learning. From the engineering perspective, we also talk to them about holistic operation and including control testing we discussed.”

As Chris Mattingly insists, the fixed goal that keeps the teams from Foley, Carollo, the WTP itself and the City working so well together is to see that the citizens of Norman get a reliable supply of high-quality water. “We have monthly planning and coordination meetings, and meet on site every two weeks. Foley will give us warning of any shutdowns,” says Geri Wellborn. “Foley has been great at communication with us. We see their guys on the ground every day and talk with them regularly. This has been a really positive collaboration.” At the peak of construction Foley will have up to 150 people on site, most of them hired locally. It is a safe bet that the people of Norman will find their money well spent and enjoy unrivaled water quality over the coming decade. 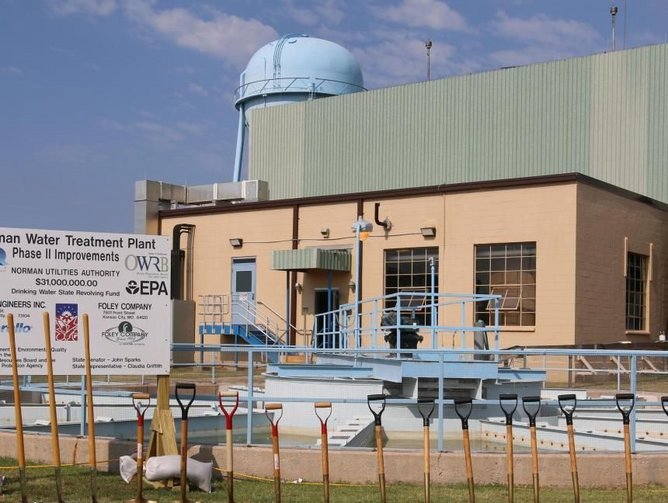 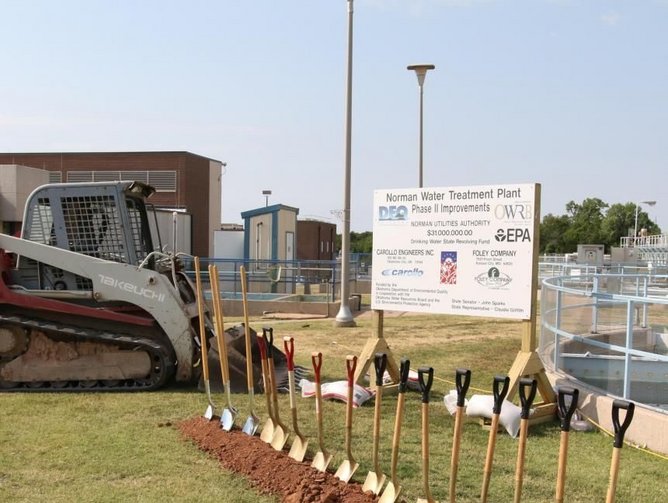 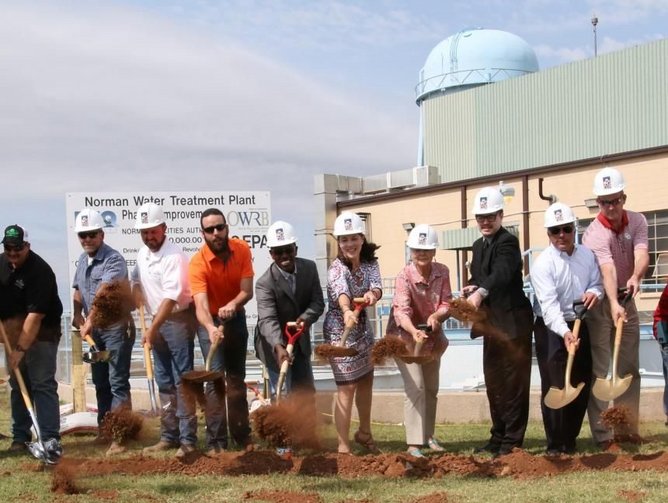 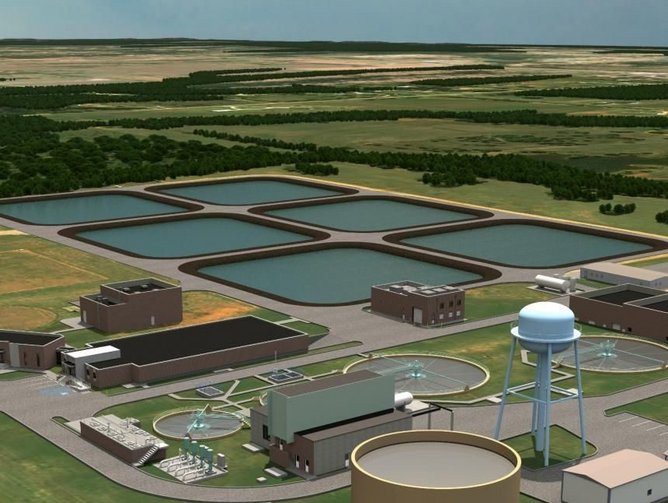