Laricina Energy is Sitting on an Ocean of Oil

To say Laricina Energy is still on the ground floor wouldn’t show the whole picture, but it would put in context the company’s big plans for expansion in the near future.

Laricina was founded in 2005 by several graduates of Deer Creek Energy, a successful energy company purchased by French Supermajor Total S.A., with an interest in pursuing multiple in situ production opportunities in the thriving Canadian oil sands. Laricina, which was named for the hardy tamarack tree prolific in the area, prides itself on its pioneering spirit, according to President, Founder and CEO Glen Schmidt. That spirit is taking the company into its tenth year.

“It's very uncommon for a small company to do this,” he said. “So, I would say [the tenth anniversary] means pride; pride and satisfaction in the quality of the work.

Now, with efforts focusing on their Germain and Saleski projects, the company’s tenth year is poised to be the one in which it explodes onto the international scene as a major player.

Located within the Grosmont formation, the company’s Saleski project utilizes enhanced oil recovery techniques. Through several years of development, Schmidt is able to boast that they’ve proved the commercial viability of the play.

“The most recent well we drilled cost us half of what the first well had cost,” Schmidt said. “We've taken the pilot work and, with a data set over a little better than three years of operations, we can now forecast. So we're in a position at Saleski to declare the commerciality of the Grosmont. That's a significant advancement of that particular project.”

The Saleski project applies a cyclical steam assisted gravity drainage (C-SAGD) technology that utilizes a horizontal well drilled into the formation. Since the bitumen that Laricina is targeting is significantly heavier than traditional crude oil, it doesn’t flow as easily. To combat this, steam is injected through the well bore into the formation, allowing the bitumen to flow more easily. The resource is then pulled to the surface through that same well.

Where Laricina is experimenting is with the introduction of various types of solvents to the process. By injecting light hydrocarbons into the formation before the steam, the company is able to more easily extract the oil while minimizing the amount of water necessary for the process. This technique has yet to be applied at Saleski, though it’s in the early stages of utilization at Germain.

“These would be common [enhanced oil recovery] schemes in conventional oil,” Schmidt said. “We're applying them now to bitumen recovery with steam and the benefit of that is we're hugely more efficient. We get higher productivity, lower steam requirements and because we use a hydrocarbon, it essentially recycles in the process.”

The addition of solvent at the company’s other flagship project Germain has already demonstrated the technology’s capability. The company brought online a demonstration project at the Germain play in June 2013. Through trial and error, Laricina is now exhibiting production levels indicative of a sustainable, commercial operation, Schmidt said.

“We need to secure the capital,” he said. “The gatekeeper for us to execute is money. On the success of tracking the capital, and it's quite competitive to get that capital, then execution of commercial performance would mean that we would become only the second Canadian independent who has grown from a concept to a public market position of commercial development doing projects at the billion dollar scale.”

Forecasting an expansion to that scale, Laricina set about a few years ago to develop a pipeline that would transport bitumen to Edmonton, Alberta. Following an application process, Laricina received approval for the Stoney Mountain pipeline, but later sold that permit to TransCanada. Now, in partnership with PetroChina, TransCanada is constructing the TCPL Grand Rapids pipeline adjacent to Laricina’s projects that will be able to accommodate the high volume of oil that Schmidt expects to produce.

“I think what distinguishes [Laricina] from some of the other small players who have the aspiration to advance their developments to commerciality is that we clearly have the assets, they're unique, and we have the capability and opportunity to execute because the physical requirements that facilitate actually delivering the production are in place,” Schmidt said. 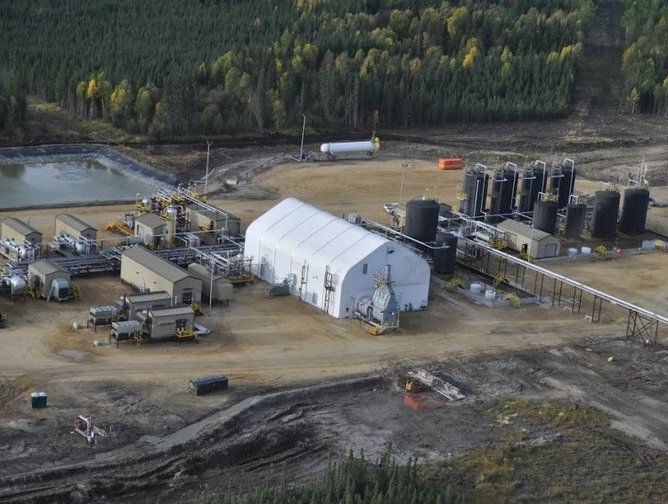