Louisville is a lively modern city with a challenging traffic problem. Built against the banks of the Ohio River, with only limited options of the I-64 and the I-65 bridges to cross the river to and from neighboring Indiana, traffic congestion is a constant problem for residents and commuters on both sides. That congestion is complicated even further by the tangled Kennedy Interchange—known locally as “Spaghetti Junction”—where the I-64, I-65, and I-71 merge on the Louisville side of the John F. Kennedy Memorial Bridge that currently carries the I-65 over the Ohio River to Jeffersonville, Indiana.

In an attempt to solve this traffic problem, Kentucky and Indiana launched the Ohio River Bridges Project to build new pathways across the river and refurbish existing bridges. Chicago-based Walsh Construction Co. was selected to take on the ambitious $860 million Downtown Crossing project, which will add a new six-lane bridge to the I-65 crossing and streamline the Kennedy Interchange.

The Downtown Crossing project will reconfigure the I-65 Ohio River crossing in a quite significant way. “Eventually we are going to have a new bridge that will carry six lanes of I-65 northbound traffic,” says Joel Halterman, Walsh Construction Project Manager for the Downtown Crossing project. “Then we are going to rehab the existing I-65 bridge to carry six lanes of southbound traffic. Essentially, we will be doubling the lanes across the river by the end of our project. It’s a massive project and it covers a lot of area, a big footprint.”

To manage the scope of the project effectively, Walsh Group broke the Downtown Crossing project into three distinct sections—the “Spaghetti Junction” Kennedy Interchange section, the new bridge itself, and the section on the other side of the Ohio River where I-65 northbound drivers will land in Indiana.

“We have Sections One, Two, and Three—with Section One in Kentucky, Section Two over the river, and Section Three in Indiana,” says Halterman. “We set the project up that way, where each section has its own management team. We all come together and there’s a lot of close coordination between the sections, but it  is almost like three separate projects for us.”

Facing the challenges of construction

With a signature six-lane bridge co-designed by Jacobs Engineering, featuring three sets of twin towers and a cable stay structure to highlight rather than impose on the Louisville skyline, Section Two is the centerpiece of the Downtown Crossing project. As strong and functional as it is visually stunning, the bridge will be supported with 30,000 cubic yards of concrete, 8 million pounds of rebar,  and 12 million pounds of structural steel.

But Section One is unquestionably the largest and most complicated section of the project, encompassing half of the project as a whole. “There are over 40 different bridges on that section of the job, 21 MSE walls—plus 700,000 yards of fill, 500,000 feet of steel h-piling for the foundations, and 300,000 tons of asphalt,” says Halterman.

Placing a priority on safety: the Walsh way

“The number one priority on any Walsh job is safety: we try and instill this in our workforce and everybody that comes to the job,” says Halterman. “For every employee that we have, our goal is that they come and make a good living on the job site, do a good job and go home at the end of the day in the same condition that they showed up in the morning. That’s what we strive for every day.”

From project to project, Walsh Group employs different methods to uphold and enforce its prioritization of safety. The Downtown Crossing project, undertaken in a relatively new project area for Walsh, employs many workers who have never worked with the company before, putting the emphasis on quality training above all.

“For every employee that comes through the job site, the first day is an orientation,” says Halterman, explaining that this initial orientation consists of a 10 hour OSHA training session to get everyone up to speed on safety protocol tailored to the unique components of the Downtown Crossing project. In addition to this initial orientation, Walsh Group also offers a gamut of supplemental training seminars to its employees—to the point where the business has set up a dedicated safety training-focused conference room for the Downtown Crossing project.

As Halterman explains, with the safety and well-being of hundreds at stake, that training is not limited to full time Walsh employees or subcontractors. Because every person involved with the project has the potential to interact with and affect operations, no one steps onto the Downtown Crossing job site without completing the initial 10 hour OSHA training session. “If we have 600 employees working here, I’d venture to say well over 1000 people in total have been through our safety orientation,” says Halterman.

The benefits of growth

The effort expended constructing the Ohio River Bridges projects is great, but the benefits that residents and businesses will stand to gain after completion is even greater. The Downtown Crossing project is expected to bring substantial improvements to congestion, especially the intense backup that tends to happen at rush hour.

“It’s really the mobility across the river—for a river town, Louisville has limited river crossings here,” Halterman explains. “This will improve cross-river mobility, and really it’s going to improve congestion and it’s going to be a safer system.”

The expected results of the work done on Section One in particular will be instrumental in improving traffic safety for drivers in Louisville.

“There’s a lot of weaving where the interstates come together. Drivers have a short distance to make a choice, and may have to move over across three lanes,” says Halterman, explaining the dangerous maneuvers that many drivers have to make every day to navigate Spaghetti Junction as it stands today. “We’re taking a lot of that out with the new design of the interchange. That was a big motivation for the work in Section One.”

Awarded the project in December of 2012, Walsh Construction broke ground on the Downtown Crossing project in July 2013. Two years later, the Louisville Downtown Bridge is 60 percent complete and on schedule for launch at the beginning of 2016—including refurbishment of the Kennedy Bridge and completion of the entire project. With this, Kentucky and Indiana residents and visitors can look forward to smoother commutes and safer travels. 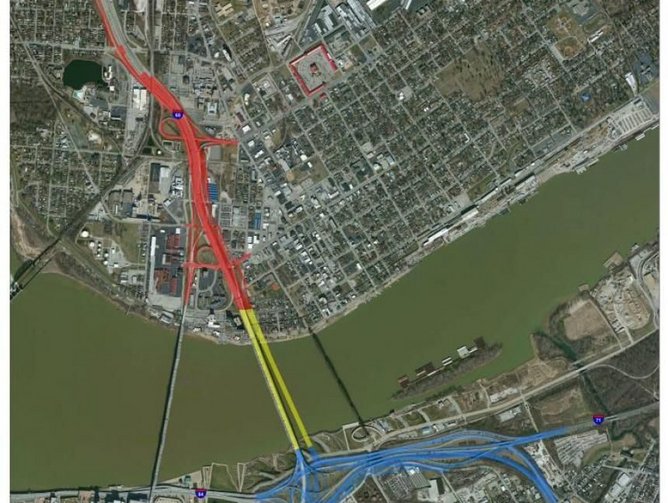 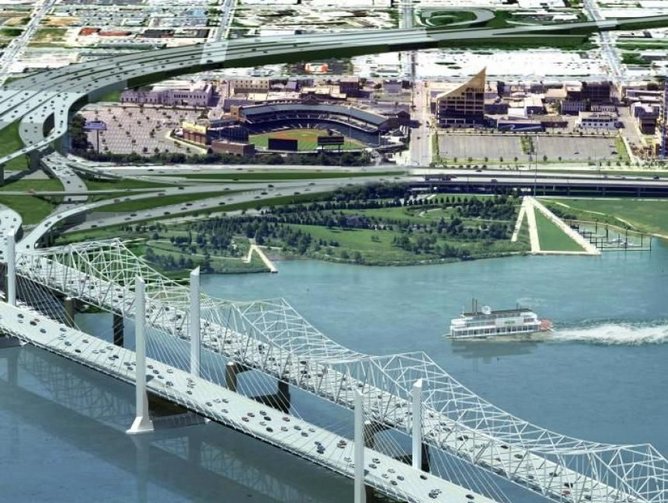 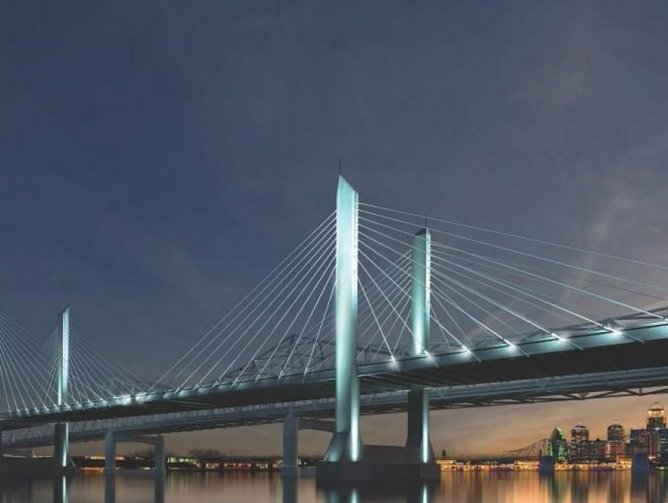 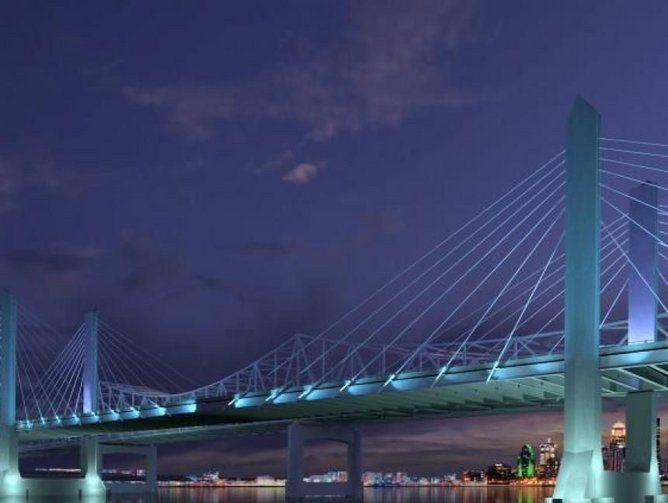 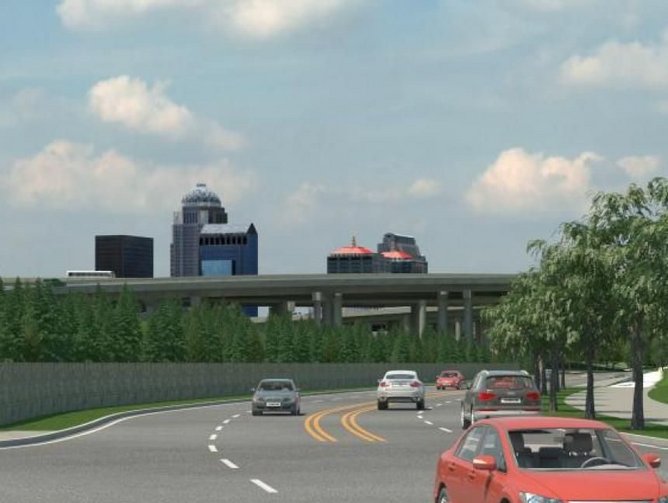 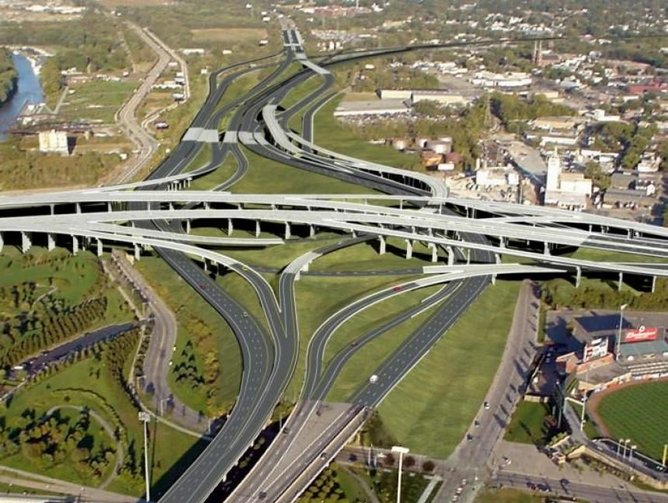 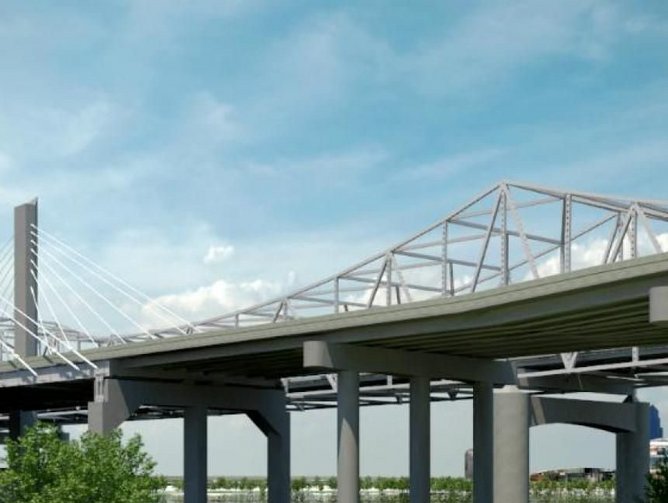 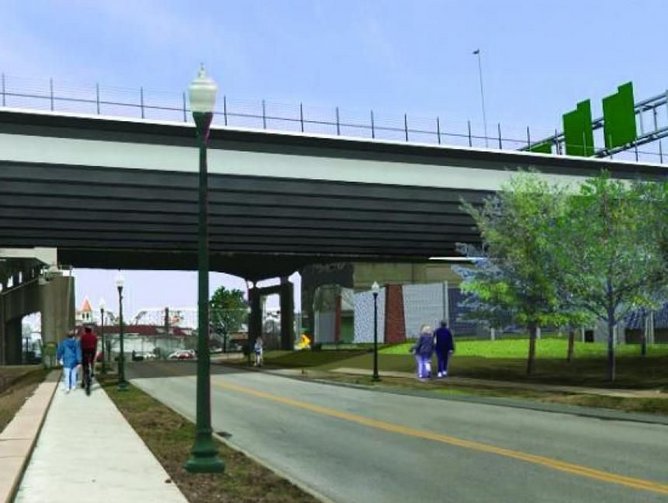