Walsh Group: In the trenches

In 2012, ACE selected Chicago-based Walsh Construction to build the San Gabriel Trench (SGT) Project, which is part of the ACE program. The $172.6 million, 2.2-mile-long grade separation project involves constructing a concrete-walled railroad trench 30 feet deep and 6 feet wide through the City of San Gabriel, into which a 1.4-mile section of Union Pacific Railroad (UPRR) track will be lowered. It also involves grade separations at four crossings, over which precast girder roadway bridges will be built.

According to ACE, the project will reduce locomotive horn and crossing bell noise, and eliminate an estimated 1,744 hours of vehicle delay each day at the four crossings. The busiest crossing is San Gabriel Boulevard, which carries approximately 35,310 vehicles per day and operates at 118 percent of capacity in peak hours. Add in street-bridge crossings at Ramona Street, Mission Road Bridge and Del Mar Avenue, and capacity jumps to an estimated 90,000 vehicles each day.

“When the job is completed, the train will be down in the trench and the street crossings will go over the train unimpeded without any safety issues crossing the track,” Walsh Project Manager Jeff Jones said.

Deep excavations that involved moving 575,000 cubic yards of dirt and work near live UPRR tracks placed safety at the top of this project’s “key challenges” list. Relocating sewers and trench drains required shoring excavations more than 40 feet deep, and the Rubio shoofly bridge required excavating within 12 feet of live track. During shoring excavation, crews encountered poor/undocumented soil conditions and man-sized boulders that could have undermined support of the live track. Walsh addressed these challenges by collaborating extensively with UPRR and permitting agencies, consulting with OSHA, and using “tracking time” to stop trains until UPRR flaggers indicated the track was safe to pass. Internally, Walsh’s safety orientations for its own as well as subcontractor staff, daily safety meetings, safety stand downs, near-miss investigations and training, site-safety planning, and numerous other tools has allowed this project to achieve and maintain an exceptional safety rating.

“It starts with bringing on people that you know have the right attitude toward safety,” Jones said. “We put safety first in everything we do.”

The first of its kind

Traditionally, sheet piles are used to stabilize a trench during construction. In this instance, however, Walsh proposed to UPRR an alternative solution that used deep soil mixing (DSM) to simultaneously serve as the foundation for the shoofly and the track shoring. In an unprecedented decision, UPRR approved this method as it not only eliminated the need for sheet piling, it eliminated the potential vibration issues caused by driving sheet piles. This work, completed by Malcolm Drilling, was especially important near the historic San Gabriel Mission, and near homes and businesses along the corridor.

“The DSM allowed us to start excavation for the trench without having to wait to press sheets right next to the new shoofly track,” Jones said.

To grade the trench bottom, Walsh uses GPS grade control on its bulldozers. The project initially used aerial photos to check its progress, but has since switched to using a drone equipped with a 4K high-resolution camera to provide video and photos.

There was also a major sewer relocation process, led by Bubalo Construction, at each of the four main crossings.  At Del Mar Avenue in particular, Walsh initially intended to use a traditional jack and bore pit underneath the trench as part of the relocation process; however, given jacking pits would significantly impact traffic, Bubalo and Walsh proposed a directional drill that was ultimately approved.

“A directional drill is much smaller than a jack and bore pit,” Jones said. “Bubalo actually directionally drilled the sewer section about 60 feet deep at Del Mar Avenue. It was an extensive amount of work.”

Taking care of the community

Walsh does more than build projects. The company takes great pride in building relationships in and with the communities in which they work that will continue to grow long after a project is complete. Recognizing how construction can impact a community, Walsh took multiple steps to minimize disruptions on the San Gabriel Trench project. In addition to choosing the DSM method for the shoofly construction because it eliminated vibration impacts to the historic San Gabriel Mission, Walsh installed monitors at that location to track noise and vibration on a daily basis. Additionally, Walsh collaborates with archaeologists and Native American monitors who observe all excavations near a Native American burial site to ensure historical artifacts are protected.

To minimize the impact on local roads from excavated material being hauled out and materials being hauled in, Walsh is milling, overlaying and replacing local roads, as well as improving sidewalks and ADA ramps as a significant component of the project.

The project’s extensive excavation has generated approximately 650,000 cubic yards of dirt. Rather than haul the dirt to a landfill, Walsh looks for ways to repurpose it, such as donating more than 300 truckloads of fill to a local youth group in the process of constructing an athletic park complex. Despite on-going fund-raising efforts, the organized lacked the budget for dirt import, which could have placed the project’s completion date in jeopardy.

“Without the dirt we couldn’t have done the project,” Kare Youth League Director of Development David Carson said. “It was vital, as the site of the park was originally sand and rock, and you can’t plant grass on that.”

To support those dedicated to helping others in the San Gabriel area, Walsh also donates annually to local charities, including the La Casa De San Gabriel Community Center, whose mission is to educate, encourage and support area families and adult community members in need; and the Asian Youth Center, which serves the social service and educational needs of youth and families, with a focus on Asian immigrants.

Finally, according to ACE, the project has created more than 6,000 full-time jobs, with the majority of the workforce comprised of local employees.

“We have built a good team from people we’ve worked with in the past in the area, and built from there,” Jones said.

The end is in sight

Currently, Walsh is excavating down and building the trench invert, has started the facing wall using one-sided forms, and has installed more than 150 36-inch pipe struts to complete excavation.

In the next six months, Walsh will be building Phase I of the trench, having completed the majority of the secant wall, secant wall cap beams and tiebacks that reinforce retaining walls for stability. Completing this work by August 2016 will allow UPRR to place its track in the trench, and begin running trains 30 days later.

“You’ll see the biggest change in the next six months,” Jones said. “The at-grade track, currently on the shoofly, will be down in the trench.”

Walsh will then demo and recycle the shoofly track and its steel girders, construct the ends of the trench and begin the project’s rehabilitation phase. 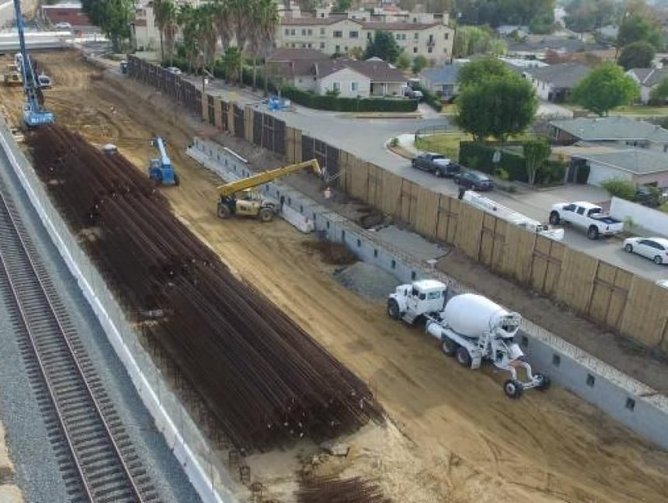 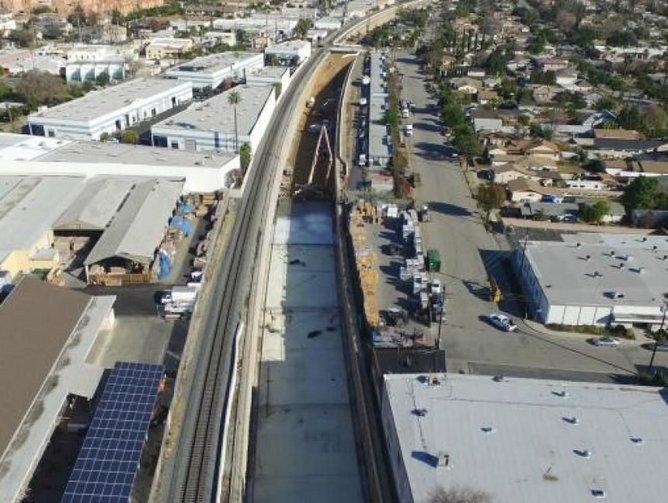 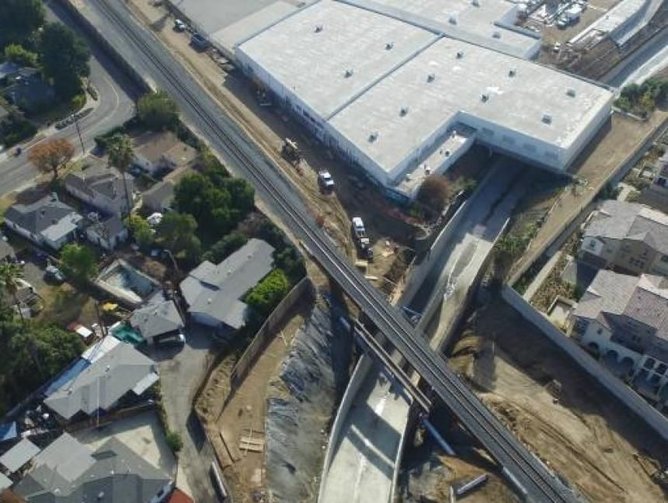 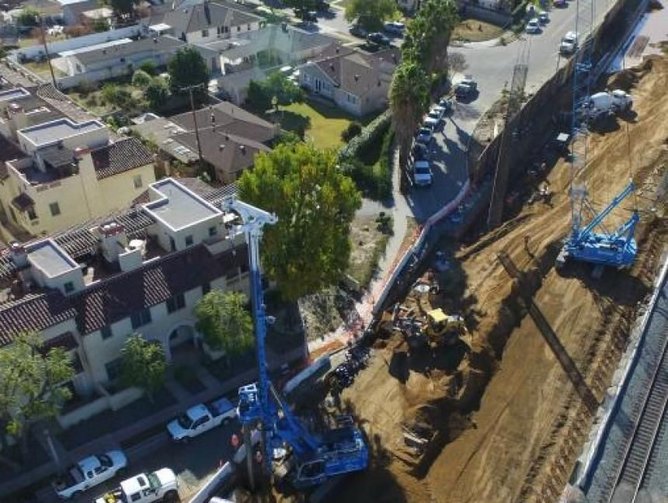 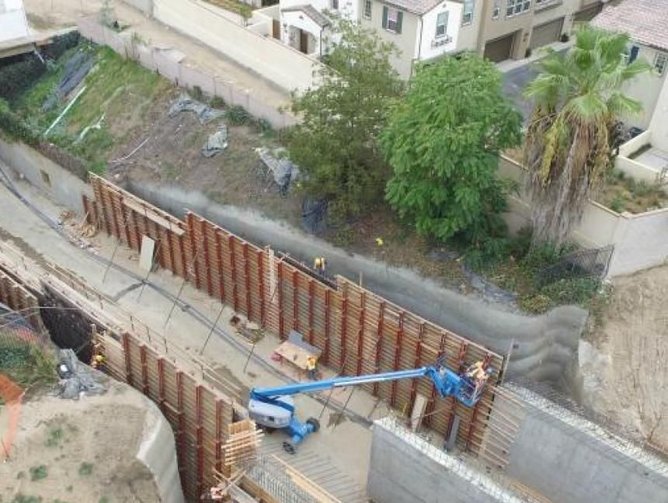 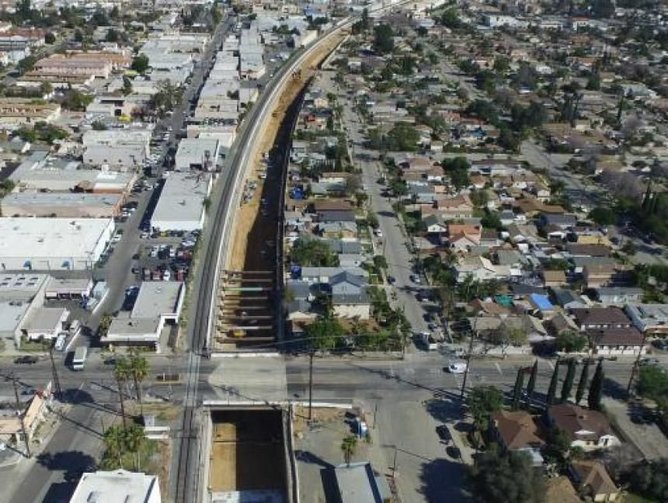