The newly-named RBC Convention Centre has undergone a $180 million expansion, allowing it to host events on larger scales and in bigger volumes.

Winnipeg is a city on the up. The past decade has seen enormous investment in megaprojects designed to attract tourists and rejuvenate local communities.

From the construction of a state-of-the-art football stadium and new airport to the renovation of green spaces and the opening of a world-renowned museum on human rights, the Manitoba capital is putting itself back on the map.

The RBC Convention Centre is emblematic of this journey. Now the fourth largest such public facility in Canada, it serves as both a community hub for locals and go-to destination for conferences, trade shows, concerts and other large events. Under the stewardship of President and CEO Klaus Lahr, now in his 24th year as boss, the centre has gone through two major and much needed growth spirts.

“I started here in 1993 at a time when the convention centre was around 20 years old and in dire need of a major renovation, which we embarked on just about immediately,” he recalls. “It took two and half years, and then we took on a very aggressive marketing and sales program – over the next three to five years we more than doubled our revenues.

“Fast forward to 1999 and we realised that if we kept on growing at the same rate then we would need more space. We were facing challenges with customers who needed bigger spaces; or if we were running a small event this might stop us from hosting anything else at the same time.”

It was not for another decade until Lahr could see what he describes as “the light at the end of tunnel” regarding expansion mark II. Having secured public funding from the Federal, Provincial and City authorities, the enlarged convention centre project had lift off and has been completed for more than a year.

For Lahr, it is a vital component of the wider revival of Winnipeg. “Winnipeg also added the MTS Centre downtown, a new concert and ice hockey venue, home to the Winnipeg Jets,” he adds. “The site is quoted by Billboard magazine as one of the most booked out venues in North America.”

On budget, on time

That a public project of this size finished ahead of schedule and within budget is something of a rarity, and a testament to the smooth running of the process from start to finish.

This involved the construction of a new South Building, taking the overall amount of meeting space above the 260,000 square feet mark. Other new features include 22,400 square feet of pre-function, lobby and registration space, a new underground car park with 150 spaces, a street level plaza with a weather protected gathering area, and a stunning City View Room located in the middle of the 131,000 square foot third floor exhibition hall.

Evidently this is no mean logistical feat, and to carry this off with almost no disruption to activities in the existing North Building makes it all the more remarkable. “In the entire building process we received just one minor complaint,” says Lahr. “An audio visual company were among many partners that commented a number of times on how busy the convention centre was while the work was going on. They had budgeted downturn in revenue and that just didn’t materialise.

“What made it work was that the contractors and the trades and our own operating department met on a weekly basis, going over in meticulous detail what could be done day by day, hour by hour. Some work had to be done at night, other times we had to take a break in order to reduce noise and dust. We worked hand in glove with all of our trades, contractors and architecture team. The customer remained number one throughout.”

The new build also carries with it sizable sustainable perks, helping it to achieve LEED Silver accreditation. “In the first year of operating we have seen a massive decrease in utilities consumption, which in turn has handsomely helped our bottom line,” explains Lahr. “The improved insulation factor is very important as well, especially given the dramatic temperature ranges seen here. It can be as low as -40’C and as high as 35’C degrees in the summer. This places a tremendous stress on buildings which must be adaptable to both extremes.”

The expansion has undoubtedly solved the conundrum facing Lahr in the late 1990s. RBC Convention Centre is now in a position where it has the space for repeat customers to grow into, and the return to Winnipeg of The Skills Canada National Competition is a perfect demonstration of the site’s renewed appeal.

“The last time they were here was in 2004 when they took over the entire facility,” Lahr states. “Now we have effectively doubled in size so they are coming back to us. We have a substantial outdoor facility and they are taking over every square foot of that as well as every square foot of indoor space on all three floors. Had we not expanded we simply would not have been able to host them.”

RBC Convention Centre can also run events concurrently - as well as the main exhibition space, it has three additional ballrooms, supporting a projected climb in revenues to the $20 million mark and beyond.

On top of simply being bigger, the centre has modernised several technological aspects with the help of consultant partner Tetra Tech. The most notable enhancement is the access to free superfast WiFi throughout both buildings, installed in conjunction with TELUS.

With the physical groundwork complete, the focus for Lahr is very much centred on service, this having rebranded and renamed to reflect the close relation with RBC Royal Bank. “We need to back this up with improved customer and guest services, “he adds, “and we are now embarking on a five year improvement program through the whole organisation.” Food and beverage and other product improvements are also being looked at closely.

The expansion has already had a direct impact on Winnipeg both socially and economically. The ability to run multiple events at once resulted in the convention centre accounting for 145,000 hotel room bookings in the year since completion, a massive increase on the 80-90,000 annual average seen before.

“National Geographic has listed Winnipeg as one of its top destinations for 2016 and 2017,” continues Lahr. “There is a myriad of things to feel proud about at the moment and the public is responding.”

So too is Tourism Winnipeg, with whom RBC Convention Centre is working closely on a program called ‘Bring it Home’. This involves approaching local influencers – Winnipeggers on national and international boards – and getting the foot in the door of their boardrooms in a bid to bring more business to the city. Those groups which are successful are awarded special Winnipeg Ambassador Plaques at the convention centre.

Our discussion finishes with a nod to the future, and what Lahr thinks lies in store for both RBC Convention Centre and Winnipeg at large. He breathes and speaks energetic optimism, and is determined to maintain the momentum gathered over the course of the past decade.

And he has every reason to feel optimistic. A $400 million office and retail complex is being built adjacent to the MTS Centre, while a new hotel is being developed next to the convention centre on the north side.

Lahr concludes: “The building of our expansion will continue to be somewhat of a catalyst in the greater neighbourhood here. There is a real economic buzz taking place in the downtown area with new high rises being built. What happened 20 or 30 years ago was a downtown flight – people were leaving for the suburbs but now they are coming back, which is a wonderful development.

“The convention centre plays a very important role in being an entertainment and local community hub and we are very active in the non-for-profit sector, helping them to raise funds. Our future is very very bright, and we are more than confident that we can continue to grow our share in the marketplace.” 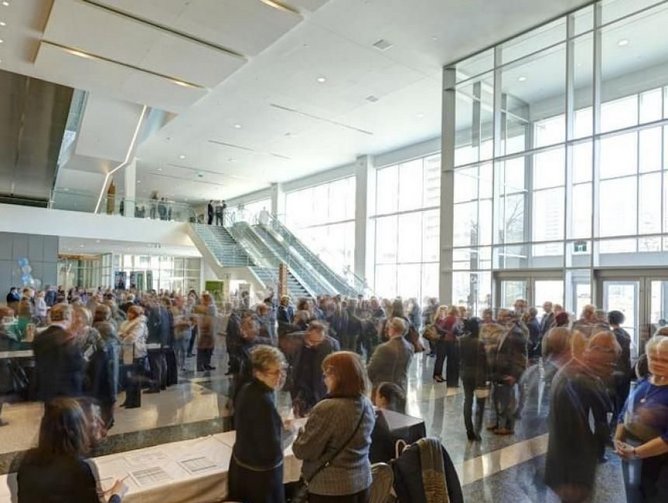