Bain: Local, digital and scope to define deal-making in 2021

From digitalisation to localisation, new trends in M&A activity brought about by the pandemic will mean new organisational roadmaps, says Bain & Company...

Post-pandemic, organisations will need to rethink their deal-making strategies as new trends in Mergers & Acquisitions (M&A) come to fruition earlier than expected, according to Bain & Company’s Global M&A Report 2021.

While 2020 proved a rocky road for M&A activity, Bain’s M&A report reveals that the appetite for deal-making remains robust with around half of those surveyed expecting higher M&A activity within their industries in 2021 and for M&A to contribute to 45% of their growth over the next three years, compared to just 30% over the last three years.

With 2021 forecast to be a year when deal-making becomes key for achieving growth and in order to compete in what has become an increasingly disruptive environment, organisations will need to “rethink their M&A strategy and roadmap”, states Andrei Vorobyov, a leader of Bain’s M&A practice, as well as “broaden their M&A options to include corporate venture capital, partnerships and minority stakes and further digitalise their M&A process”.

From digitalisation and localisation to an escalation in scope deals, these are the M&A trends which the COVID-19 pandemic has brought about sooner than expected. 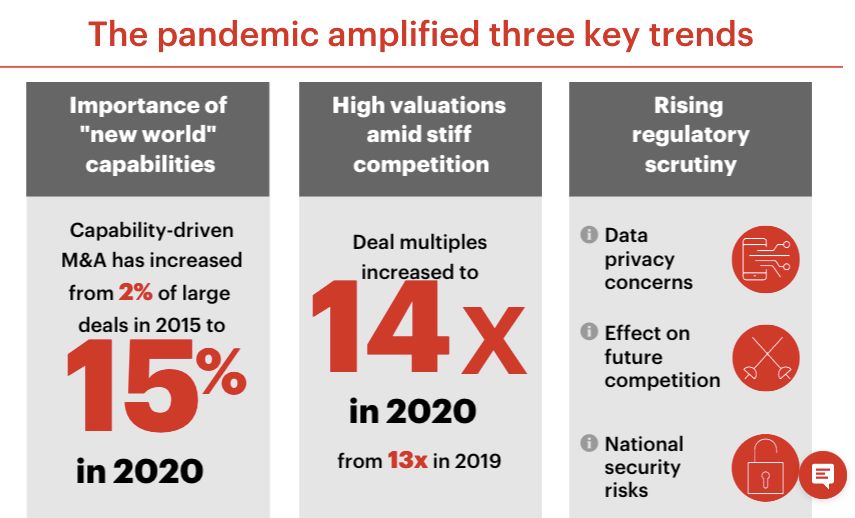 More so than ever, the external environment in each industry is setting the boundaries for how much M&A companies can do. Bain outlines some of the most industry-specific trends.

Top 10 US mergers and acquisitions of the last two decade
5 min
Bain: Why sustainability is the new digital
5 min
Bain: Getting Business Resilience Right
5 min