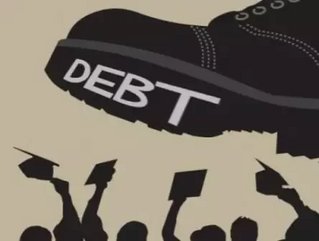 The average student loan debt is approximately $25,000, which is up 25 percent in the last ten years.

The majority (80 percent) of student loans are government-guaranteed, with 30 percent of these government-backed loans past due 30 days or more. That means the taxpayers are on the hook should the loans default.

A key driver of this situation is, of course, the recession. And let’s not forget that technology-driven changes give employers the ability to do more with less without hiring more staff.   With time on their hands and a desire to get hired again and have a shot at a better job, large numbers of laid-off workers decided that they would need to get retrained, so they went back to school (and many had no other choice but to pay for their education with a student loan). Unfortunately it has been a very slow recovery and those shiny new degrees did not provide employment. In addition, many young college graduates have also had to join the ranks of the unemployed. All have found that paying off debt while unemployed is very difficult.

Politicians, college administrators, and students all have various ideas on how to fix the problem. Here are my suggestions based on my thirty years experience as a technology futurist and business strategist who helps people see invisible opportunities and solve seemingly impossible problems.

Start with the schools:

We have to retrain the high school and college counselors who give students advice about which major and career to pursue. Remember, one of the problems is that students aren’t getting jobs when they graduate. Yet there is a great need in the U.S. right now in the areas of science, math, and engineering, as well as in areas that don’t require a bachelor’s degree, such as fiber installers, electricians, and mechanics.

Too many counselors aren’t helping students see the path to employment based on the degree they’re picking. Instead they tell students to “follow your interests and passion” and pick a major based on that. No wonder we have so many unemployed people with bachelor’s degrees in philosophy, history, anthropology, and a host of other fields that require a master’s degree or Ph.D. for employment. No one told these students that finding work in these fields with only a bachelor’s degree in hand is futile, and too many of these students aren’t willing or able to get a post-graduate degree. With this set-up, unemployment is inevitable.

How about giving students a three column list that shows the path to employment based on various majors. The list can show the jobs you can get with a two-year technical degree, such as machinist and electrician; jobs you can get with a bachelor’s degree only, like teacher, accountant, or engineer; and the jobs you need a masters degree or higher to get work, such as psychologist or sociologist. If more students knew that their chosen major requires an advanced degree to find employment, chances are high that they’d choose a different major.

Reward the behavior you want:

The economic growth of the U.S. and our ability to compete in the 21st century requires science, math, and engineering majors—and lots of them. We simply can’t maintain our competitiveness without people with degrees in those areas. So why not provide incentives (or rewards) to get students to strongly consider those fields?

For example, a student who gets a two-year tech degree to become a machinist, or a four-year degree in engineering or math, and then works in that field could get a tax break on their student loans every year they are employed. Yes, they pay less tax, but the money they would have paid in taxes is still collected because it’s going toward paying off their student loan and they are helping to keep employment high and America competitive.

Now, does this mean students will no longer study things like philosophy, humanities, sociology, and anthropology? After all, if no one gets rewarded for those things, they won’t want to pursue them, right? Not necessarily. For those who have the means to get advanced degrees in such fields, they will likely want to pursue one even though there’s no future tax incentive. For those who need to work after obtaining their bachelor’s degree, they will find great benefit making one of those other fields of study their minor. Why? Because we need creative problem solvers. Having a philosophy minor, for example, will help with critical thinking and problem solving skills. When you have a minor that’s not linked to your major, you can see the world in ways that others cannot. And that’s a reward unto itself, because it makes you even more valuable in the job market.

Some of the larger companies and industry associations currently offer grants to students studying in a particular field. Why not expand these existing programs so the grant money can be applied to existing student loans (for people currently working in the specific industry) rather than just current tuition expenses. For example, perhaps the Association for the Advancement of Science can create new types of grants that can be applied to student loans for people who are going into science or math. Or maybe the National Association of Engineers gets together with the larger engineering companies and provides grant money to help pay for student loans when people get jobs in their field. Maybe they can even work together in cooperation with some government incentives so that there is a reward.

Additionally, some states use their lottery proceeds to offer high school students with a 3.0 or higher graduating grade point average free tuition if they go to an in-state college. Why not expand this program to help science, math, and engineering majors who have already graduated reduce or eliminate their student loans if they work in the state. The key is to look at what slots we need to fill in terms of workers. Fill those slots as quickly as we can by making it easier for students to pay off loans when they get jobs in those fields of study.

These are just a few programs that could be expanded to help alleviate the impending crisis. The point is, you get the behavior you reward. So by giving students an incentive for picking careers that would give them better prospects for immediate employment, we’re taking major steps to fixing the potential of having a real student loan debt crisis.

The real problem we’re facing is not the amount of student loan debt. Ultimately, the real problem is that the U.S. has an under-employment crisis, meaning we have people who are trained for jobs that are going away or are trained to do things that there aren’t jobs for because they need retraining or more education. So this isn’t just about fixing today’s student loan debt problem today. It’s about fixing tomorrow’s underemployment problem today and tomorrow. If we’re going to be competitive in the 21st century with China, India, and other places around the world, we need to give better guidance and counseling to our students, and we need to reward the behaviors and choices we want so we get more science, math, and engineering majors to name a few.

Not only does this approach help the students and ease the potential of a student loan debt crisis, but it also helps the U.S. and every single taxpayer. This approach is good for all of us because it will make the U.S. more competitive internationally—and that is the real cornerstone of our country’s future prosperity.

About the Author: Daniel Burrus is considered one of the world’s leading technology forecasters and business strategists, and is the founder and CEO of Burrus Research, a research and consulting firm that monitors global advancements in technology driven trends to help clients better understand how technological, social and business forces are converging to create enormous, untapped opportunities. He is the author of six books, including The New York Times and The Wall Street Journal best seller Flash Foresight: How To See the Invisible and Do the Impossible as well as the highly acclaimed Technotrends.