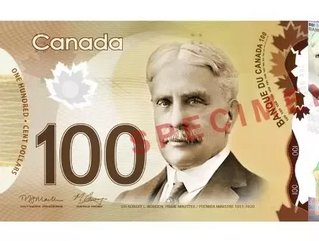 Canada’s first polymer bank note will debut in circulation today, says Bank of Canada. Celebrating Canada’s innovative medical contributions, the new note was revealed to the world in Toronto at the MaRS Centre.

“These polymer notes don’t just celebrate innovation; they are themselves at the frontier of bank note technology. They were developed by a team of physicists, chemists, engineers and other experts from the Bank of Canada and from across the bank note industry,” said Mark Carney, Governor of the Bank of Canada.

These new bank notes are being incorporated because of their circulation length, lasting up to two and a half times longer in use, and security attributes—most importantly their counterfeiting prevention benefits.

"Canada's new bank notes will have innovative security features that are easy to verify," said Mark Carney the Governor of the Bank of Canada in a press release. "The leading-edge technology in these notes will expand the frontiers of bank note security."

“The design of the $100 bank note celebrates Canadian innovation in medical research, including the discovery of insulin to treat diabetes. We are honoured to issue this note on the site where Banting and Best conducted their groundbreaking research almost a century ago. Many forget that diabetes was once a death sentence. The discovery of insulin changed that. It was at that desk, Sir Frederick Banting’s desk, where science and innovation met and the lives of hundreds of millions of people changed. Today’s date is no coincidence. November 14 is World Diabetes Day and the 120th anniversary of Sir Frederick Banting’s birth. This $100 note is a tribute to Canadian researchers who have left their mark in many areas,” said Carney at the event.