The Bank of Canada Unveils the Future of Money: Plastic Bills 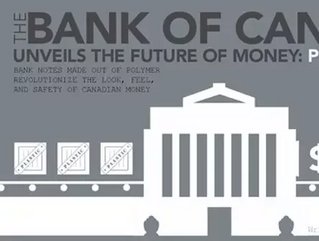 The Canadian loonie has been getting a lot of attention lately, not just because of its parity with the dollar but also due to the release of new loonie notes made out of plastic polymer. During the next two years, the Bank of Canada will be releasing $100, $50, $20, $10 and $5 plastic notes with entirely new designs celebrating Canadian achievement and innovation.

This is the first time in Canadian history that Canadian money has been printed on anything other than paper. These new bills are made out of biaxial-oriented polypropylene substrate, a substance called Guardian™ and made by Securency International of Australia. Polymer bank notes are not a new concept but Canada’s bank notes mark the first time polymernotes have used a stripe of holographic foil as an identifying security feature.

Other security features on the plastic bills include: raised ink, metallic portraits, transparent text, hidden numbers, and a maple leaf border. The bills also contain large numerals against contrasting backgrounds, dominant colour schemes, an electronic reader code, and a system of raised dots for each denomination—features for the blind and sight-impaired. Not everything about the bills is new however; the Bank of Canada stated that they made a conscious decision to combine new innovations with previously efficient elements.

According to the Bank of Canada, these notes are 2.5 times more durable than the paper bills and have thus far survived a variety of stress tests carried out by YouTube users such as washing, cutting, and ripping the bills.

The switch to polymer is mainly due to its greater manufacturing complexity and the ability to carry more security features than paper bills, making plastic bills more difficult to counterfeit.

"Counterfeiting rates have been reduced by 90 per cent since 2004. Issuing this new series of bank notes enables us to continue to stay ahead of counterfeiters," Governor Carney said in a press release about the $50 note announcement. "And by regularly checking the leading-edge security features on these new notes, Canadians can help protect themselves from counterfeiting threats.”