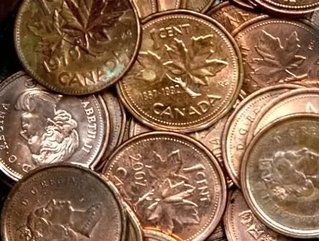 We can finally feel guilt free about vacuuming our pennies up, using them to balance uneven table legs, or even frivolously chucking them in the trash. The federal government has finally declared the penny is worthless, and Canada is set to officially stop producing copper-plated maple leaf coins.

“The penny is a currency without any currency in Canada,” Finance Minister Jim Flaherty joked to reporters on Thursday--yet his witty remark is all to true. In fact, it costs 1.6 cents to produce a penny, which costs the Royal Canadian Mint in Winnipeg approximately $11 million dollars a year in total costs.

With the rising price of labour, metal, manufacturing and distributing costs this fiscal commitment to the tiniest currency symbol is simply no longer worth the effort to the Canadian government. The penny's circulation became more nostalgic and traditional than financially pragmatic.

However, those pennies still in circulation will not become obsolete. Merchants must still recognize pennies when used. However, if the purchaser does not have pennies on hand they must charge them to the nearest five cent mark, “in a fair and transparent manner.”

The government suggests citizens hand over their pennies to a worthy cause. Flaherty remarked, “So, I say to everyone, all of you here: free your pennies from their prisons at home and those jars they’re in and give them to charity.”

While this ban on the worthiness of the one cent in Canada speaks monumentally to our currency’s inflation over the last century, it also speaks to our culture’s reliance on plastic cards for fiscal transactions. Yes, the penny may the first tangible currency marker to find its grave, but it may not be the last--as the rise of the digital age is bound to eventually make all paper and coin currency a nostalgic memory of the distant and archaic past.