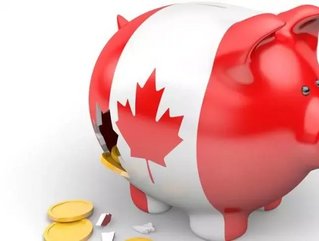 Canada’s economic growth accelerated at a slower pace than predicted in the first quarter of the year.  Furthermore, the growth lost momentum ttowards the end of the quarter. These factors bode poorly for a second quarter that is expected to be further hit by Alberta’s wildfires.

Despite this disappointing first quarter, Canada's pace of growth was still a better at start to the year than it was in 2015, when the oil-exporting country was impacted by the collapse in crude prices.

According to Statistics Canada, gross domestic product (GDP) increased at a 2.4 percent annualised rate in the first quarter. This was lower than analysts’ expectations for 2.9 percent.

The report did not alter expectations that the central bank will have minor involvement after it cut interest rates twice last year.

Economists were pleased by improved export activity, which is key to the central bank’s outlook.

"Exports came back quite nicely," said Sal Guatieri, senior economist at BMO Capital Markets. "That's a welcome increase and a strong one at that, obviously benefiting from positive U.S. demand and the weak Canadian dollar."