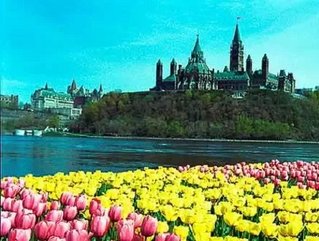 The fun thing is that's what actually happened between Canada and Holland. And this morning, residents of the nation's capital will wake up to find a million blooming tulips waiting for them throughout the city.

It's a fitting reminder of the sacrifice and achievements of our veterans, an honorable gift on the part of the Dutch, and a beautiful day in a garden as well - as storybook an ending as you could ever hope for.

And it makes money too. Revenues from the tourism generated by the festival, running through to the 21st, top almost any other event of the year in Ottawa.

They're good tourists, too: families guiding young children through the gardens, photographers trying to get that perfect postcard angle, retirees enjoying a beautiful walk in the sunshine. Unlike a concert or an open-air market, tourists strolling through the flower fields tend to eat at nice restaurants and pick up after themselves.

It's a tradition of which Ottawa residents are justifiably proud. And with the 60th anniversary of the festival now upon us, it's the perfect time to stop and smell the tulips. They're in bloom.