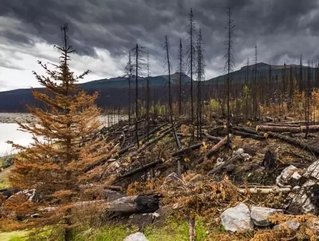 According to the Governor of the Bank of Canada, around half of predicted damage to the country's economy from wildfires in Alberta was caused by lost crude production that should recuperate as energy producers resume operations.

The central bank previously said that fires could cut about 1.25 percentage points from Canada’s second-quarter real gross domestic product growth. The figure came from a statement that accompanied the bank’s May rate decision, in which it held the key interest rate at 0.5 percent.

“Around half or a little bit more than half of the 1.25 number that we gave you would be because of lost oil output,” Governor Stephen Poloz said during a press conference in Ottawa. “If you assume oil output returns to its previous level, then you can say, ‘well, I’d get that much rebound.’”

Poloz stated that it is harder to estimate how long it would take for residents in the region to resume their daily lives. “It’s a very difficult situation for people,” he added. The fires destroyed around 2,400 homes. Residents only began returning to Fort McMurray (a hub for Canada’s oil-sands industry) on Wednesday.

Although oil-sands facilities weren’t damaged in the fires, many operators were forced to reduce or stop production because of the risk posed by encroaching fires or issues affecting their workers.

After cutting its key interest rate twice in 2015, the Bank of Canada has held rates steady at 0.5 percent so far this year. Its next rate announcement is due July 13.