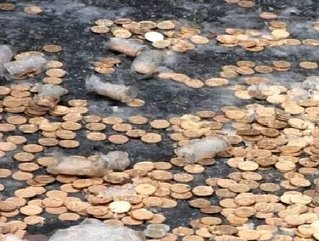 It sounds like a childhood miracle come true—but a highway covered in coins and candy was made a reality yesterday.  A Brink’s trailer headed for the Canadian Mint crashed on Highway 11 near Kirkland Lake around 4 am Wednesday morning, spewing millions of dollars worth of Canadian coinage onto the public asphalt. In a hilariously whimsical turn of events a truck carrying candy also happened to crash at the scene, spraying a rainbow of sugary sweets onto the newly golden highway.

While the outcome of the crash summons magical images, the reality of the collision was much more serious. The Brinks tractor-trailer collided with a  large rock cut resulting in two injuries--the truck's driver and the passenger are currently both in the hospital.

CBC News was at the scene of the collision, and interviewed South Porcupine OPP Const. Marc Depatie who witnessed the crime claiming, “The rock cut … acted as a can opener and peeled the side off of the trailer. The load, travelling at highway speeds — and then coming to a sudden stop — was effectively catapulted for hundreds of metres from the scene.”

Officials have taken great measures to clean up the bountiful mess. They even deployed an industrial magnet on a crane to help speed up the road restoration process, and off duty OPP officers have worked endlessly to ensure the coins are recovered.

While officials want to clean-up the highway for public use, they also want to ward off any potential coin-scavengers, as the collision is the only vehicle crash in Canadian history to compromise Canadian coinage in its wreckage.

While truck collisions are typically no laughing matter, this surreal news is a much needed pick-me-up in an otherwise gloomy economic landscape. For most of us, this epic collision is as close as we will ever get to candy falling from the sky, and streets paved in gold.