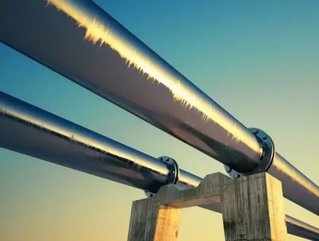 According to data compiled by Thomson Reuters, analysts had been expecting 39 cents of adjusted earnings per share.

The company’s chief executive, Al Monaco, said that there could be upcoming opportunities to build new pipelines in Mexico as the country opens its energy industry up to outside investment.

“They're obviously in significant need of pipeline infrastructure,” Monaco said, adding that this is true for both oil and natural gas.

Mexico is currently in the process of ending the government’s 75-year monopoly over energy through a series of reforms.  Officials hope that private investment and foreign expertise can help revive its waning oil and gas production.  Globally, the sector is booming.

Earlier this year, a delegation of Mexican government officials and business leaders visited Calgary to tout the opportunities.

“Obviously these changes that have been brought down are very positive in that they're going to encourage a lot more investment,” Monaco told the Canadian Press.

But according to Monaco, Enbridge has no immediate plans to enter Mexico.

“We're going to watch to see how these regulations work through and we'll keep our finger on the pulse and see where we go there,” he said.

TransCanada Corp.—a rival of Enbridge—already has a foothold in Mexico, with two pipelines currently operating and expansions in the works.  The Calgary-based company has also indicated that the reforms could mean opportunities for new projects.

Enbridge executives are also discussing the possibility of building a new rail unloading facility in Illinois that would help bring Alberta crude to the U.S. Gulf Coast with a tentative start-up date of early 2016.

The facility is projected to have a capacity of 140,000 barrels per day and would be adjacent to the start point of Enbridge’s Flanagan South pipeline.  Flanagan South is slated to begin shipping crude to Cushing, Oklahoma later on this year.  From there, the oil can make its way to the lucrative Gulf Coast through the Seaway pipeline, which is owned in part by Enbridge.

Earlier this summer, the federal government gave the green light to Enbridge’s multibillion-dollar Northern Gateway pipeline project, which will connect Bruderheim, Alberta to Kitimat, British Columbia.  The project is subject to 209 conditions that were recommended by a regulatory panel last year.

The twin pipelines would connect growing oilsands crude with buyers on the other side of the Pacific Ocean.

But construction won’t begin anytime soon, as Enbridge hopes to first win support from communities along the project’s route.  Opponents have already stated their intentions to fight the project in court.