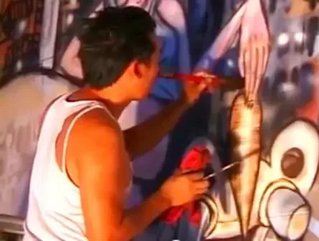 Gone are the days of the “starving-artist”, it seems a new money-mogul artist has emerged thanks to golden touch of Mark Zuckerberg. Dave Choe, a San Francisco artist who was hired to paint the murals of the Facebook office in 2005, was offered stock options or cash as payment for his art, and Chloe did what any starving-artist wouldn’t do—he took the stock options.

Facebook was then just a fledgling, scrappy company who had not yet sprawled into its huge mega IPO status in the business world. So rather than feel elated with his decision, Chloe initially regretted taking the stock options in lieu of the cash. He later told the New York Times that his stock choice was, “ridiculous and pointless.”

Is Choe shucking off centuries of artistic poverty shackles? He even recently interviewed with Barbara Walters about the old myth of the suffering artist, dispelling the myth that genius equals pain. It seems his stance on art may be, like Facebook, entirely revolutionary.

His website bio paints a very different picture of the now mega-mogul artist stating, “[David] is currently homeless, wandering the earth, making good art and bad music.” From rags to riches is a total understatement; Choe almost instantaneously transformed from homeless street tagger to his elite spot as one of the world’s wealthiest artists.

He even has a biographical documentary coming out titled, “Dirty Hands: the Art and Crimes of David Choe” which will explore his unlawful, hustler life which even led to a three month stint in prison.

DIRTY HANDS THE ART AND CRIMES OF DAVID CHOE

Dave Choe, whom the art world considers an up-and-coming bad boy renegade artist, has a brilliant body of prolific work and in many ways is positioned to become this generation’s most relevant artist. More so, his success as a muralist is absolutely unprecedented in the art world, as even high-brow artists do not usually see great monetary rewards in their life time.

It seems like the wake of Facebook’s innovative emergence into society has not waned; only bled into other cultural fabrics and paradigms.