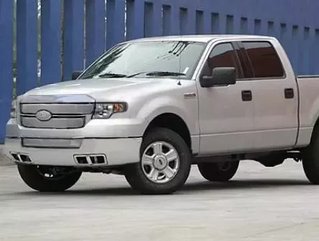 Ford Motor Co. agreed today to recall 1.2 million F-150 pickup trucks today, under government pressure, after more than 200 reports that its airbags were suddenly deploying. Ford will recall the 2004-2006 F-150 trucks and some 2006 Lincoln Mark LT pickups that have been under investigation by the National Highway Traffic Safety Administration (NHTSA). The agency said it was reports of at least 269 airbag deployments and 98 injuries due to the trucks.

Injuries include fracture arms, burns and chipped teeth. Bet you’ll think twice if you make it out to the Ford Motor new car sales lot this weekend, won’t you?

NHTSA Administrator David Strickland says: "We are pleased that Ford shares our commitment to safety and is taking action to protect consumers by expanding its safety recall to include an additional 1.2 million Ford F-150 and Lincoln Mark LT vehicles," he said. "We hope to continue working cooperatively with auto manufacturers to ensure safety defects are addressed quickly for the driving public."

Back in February, Ford said it would recall 135,000 2005-2006 F-150 trucks in the nation over the government’s same concerns. On January 26 of this year, the NHTSA demanded Ford to recall 1.3 million vehicles to prevent similar issues.

However in 2006, Ford made two design changes to the F-150 after sudden airbag deployment, yet they’re still having safety issues show up today. Ford chose to expand the recall to “reassure customers of Ford’s commitment to safety and eliminate any customer confusion,” it said in a statement. Ford F-150 owners will receive a new clockspring jumper wire installed with a mesh cover to prevent any future airbag safety issues.

Who knew a device like a safety airbag could create so many more safety issues to the driver?