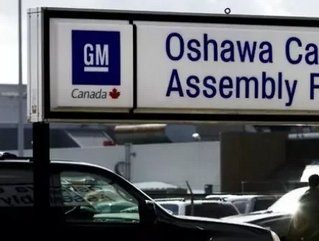 Today General Motors, Co announced that it plans to close one of its two lines at the Oshawa, Ontario assembly plant by June 2013 and lay off 2,000 employees, according to Reteurs.

General Motors Canada’s headquarters are located in Oshawa and the company employs 4,000 people in the city of Oshawa and 9,000 workers throughout Canada. The Oshawa plant manufactures the current generation Chevrolet Impala and Chevrolet Equinox.

Canadian Auto Workers (CAW) employees were notified today that one of the three total shifts on the consolidated line will be eliminated in the fourth quarter of 2012.

Then a second shift will be removed in the first quarter of 2013 and the consolidated line will cease entirely when production of the current generation Chevrolet Impala ends in June 2013.

The current contract for CAW members at GM expires this September and negotiations for a new three-year deal are set for this summer.

The assembly line was scheduled to be shut down in 2008 but production continued when market demand unexpectedly rose for the Chevrolet Impala and Equinox.

"It is too early to predict accurately the job impacts related to these scheduling actions which will unfold over the next year as some employees may elect to retire and others will be on indefinite layoff," General Motors of Canada communications director Faye Roberts said in an email released to Reuters.

According to the Financial Post, this is the latest move in GM’s retreat from Canadian auto manufacturing as the company attempts to rebound from its bankruptcy of 2008. 2012’s first quarter results showed a profit from North American auto sales but significant loss from the European and South American markets, signaling possible trouble ahead if North American sales fall off.

GM to Manufacture the Chevy Impala in Canada

Read the May issue of Business Review Canada!

The announced closure was met with criticism and consternation by the CAW.

"The decision to close this very productive line and put 2,000 more workers out of a job is ill thought-out and could damage the company in the long run," Ken Lewenza, President of CAW said in a statement.

"It is also a betrayal of the tremendous work and sacrifices by our members that went into keeping General Motors afloat in 2008-2009, when the company was on the verge of bankruptcy."

In the autumn, the CAW plans to negotiate with General Motors to see if the company would be willing to manufacture a different product at the assembly line instead of closing it.