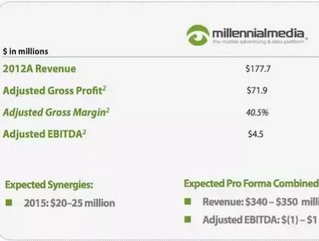 Millennial Media announced on Tuesday that it reached an agreement to acquire privately-held Jumptap, a merger that marries to well-known mobile ad companies.

The agreement, according to the acquisition press release, is a predominantly stock transaction. Jumptap shareholders will receive 24.6 million shares in publicly traded Millennial, giving them 22.5 percent ownership of the company.

Jumptap was founded in 2004 after raising $122 million in funding from investors. According to the slide deck published by Millennial, Millennial saw $177.7 million in adjusted revenue in 2012, while Jumptap saw $63.6 million. Their respective net losses for 2012 were $5.4 million and $13.0 million. The presentation notes that the combination of the companies will result in revenue between $340 million and $350 million.

Mobile ad spend has jumped exponentially in the past year and the acquisition of two major players in the industry corners the market and promises customers a better combined product according to analysts.

George Bell, CEO of Jumptap is joining the Millennial Media board of directors as Vice Chairman. Millennial also noted that the combined stock and cash components of the transaction value Jamptap at $232 million.