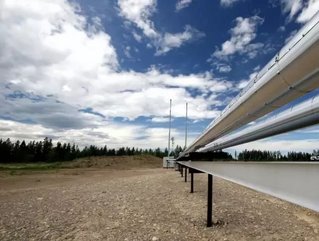 Kinder Morgan Canada (KMC), a subsidiary of Kinder Morgan Inc, is to return around CA$1.2bn to its shareholders following the sale of the Trans Mountain oil pipeline to the Canadian government, Bloomberg reported
The line takes crude from the oilsands in Alberta to the west coast of British Colombia.
Following the Court of Appeal’s decision to overturn the pipeline’s expansion approval, the government bought the Trans Mountain project for $4.5bn in what has been described as a bailout.
Canada’s Prime Minister, Justin Trudeau, said:
“The fact that we as a government now control the project means that we’re able to continue to move forward in this vital project that’s in the national interest. What the court ruling made clear is that we have to do it the right way”.
KMC’s shareholders agreed to the sale of the pipeline less than an hour after the court made its decision, and the subsidiary is set to end the year with little to no debt.
See more:
Following the issues with the Trans Mountain project, Kinder Morgan Inc is considering withdrawing from Canada entirely despite its continued ownership of further Canadian assets.
According to Bloomberg, Kinder Morgan said of its Canadian arm that its main focus was to use its assets in support of the Trans Mountain pipeline.
Bloomberg added: “In addition to the Canadian portion of the Cochin pipeline system and the Jet Fuel pipeline system, Kinder Morgan Canada Ltd. has a network of crude storage and rail terminals in Edmonton, Alberta, and the Vancouver Wharves Terminal in British Colombia”.
While Kinder Morgan’s CEO, Steve Kean, said the assets could stand on their own, the company will nonetheless consider its options.
oil industryKinder MorganshareholdersKinder Morgan Canada
Share
Share