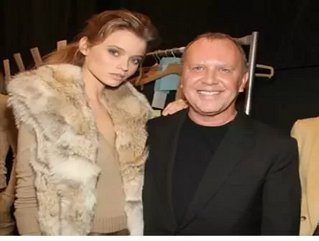 Michael Kors became a publicly traded company (KORS) Wednesday night, selling $944 million worth of stock in his premier night on the market. Initial pricing of the stock priced the brand at $17 a share, but after speculative confidence for the stock grew, the stock entered the market at an increased $20 a ticket. This new price mark did nothing but encourage sales of the stock, as Michael Kors Holdings Ltd., sold a stellar 47.2 million shares, (seven and a half million more than originally expected), making the total company worth around $3.8 billion dollars. The night proved to be an all around celebratory event for Michael Kors the man, who retains 8.6% stake in the company, making his share of KORS worth a cool $400 million.

America’s favorite luxe-glamor icon, Kors is known for outfitting America’s elite celebrities including Angelina Jolie and First Lady Michelle Obama. Gaining massive exposure as a quick-quipping style judge on Lifetime’s (Previously Bravo’s) Project Runway, Kors parlayed his brand success into widely successful retail endeavors, opening his first official store in 2007. The brand thrives in a retail setting, as the company's various lines for men and women are carried in over 1,800 department stores, as well as through their 200 brand named retail stores. The shops are a success, exhibiting a steady 40% sales growth over the past few years. KORS current market profitability has trail blazed expectations of expansion, as the company anticipates opening an additional 400 retail stores throughout U.S., Europe and Japan in the upcoming year.

While fashion brands often do not make great stock investments, as seen by the routinely soft market behaviors of inaccessible, high price point lines like Prada, Michael Kors’s diversity and accessibility of products make him a secure bet for the conservative investor. Like his predecessors Calvin Klein and Ralph Lauren, Michael Kors as a person, and brand, is more or less unanimously well liked. According to a report released by Zeta Interactive Corp, a digital marketing company that analyzes conversations across social media networks, Mr. Kors is the most “buzzed about fashion designer of 2011,” with ninety-five percent of his internet buzz being positive.

Yes Kors certainly  has his place in the haute-couture world, but he also has a strong presence in the retail world, and as Coach and Louis Vuitton’s stock successes can testify, investors love specialty retail stores. The only potential hazard for the company as a whole is that its success rides on the shoulders of one brilliant man: Michael Kors himself. Yet if Mr. Kors’s proven track record of brilliant success under international creative pressures is any indication, the brand, like the man, will without a doubt continue to, “Make it work.”