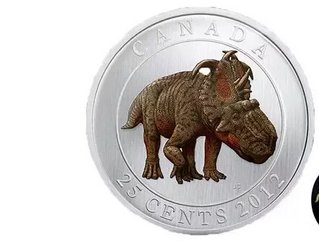 Relive your childhood awe in glow-in-the-dark products with the Royal Canadian Mint’s new quarter! A part of a new collector coin series, the quarter features the Pachyrhinosauraus lakustai, a dinosaur originally discovered in Alberta by Charles M. Sternberg in 1946.

Designed to feature a paleontologist’s interpretation of what the Pachyrhinosauraus lakustai may have looked like, collectors can bring the coin into the dark (after a sufficient amount of time in bright light, approximately 30-60 seconds) to reveal the inner skeleton of the dinosaur.

This dinosaur coin is the first in a four coin prehistoric creature photo-luminescent series and the Royal Canadian Mint will limit production to 25,000 coins worldwide.  Available on April 16th for $29.95, the new quarter comes packaged in a Royal Canadian Mint branded maroon case lined with black flock.

Whether you’re a dinosaur enthusiast or just want to own a unique coin, this quarter is fairly exceptional and can also be an ideal gift.

Will the Royal Canadian Mint benefit from this addition to its product line? Other than the initial interest of a glow-in-the-dark coin, it’s hard to see many shelling out the $29.95 for just a quarter. Even further, because of the cost, most Canadians will probably never see the photo-luminescence first hand. Still, the coin is an interesting addition to the world of coin production and may change coinage as we know it if another country follows suit.