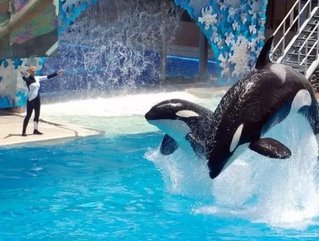 After more than a year of public criticism surrounding the treatment of its killer whales, SeaWorld has released a statement saying it will build new, larger environments at its theme parks and will fund additional research focusing on the animals, ocean health and whales in the wild.

The company, headquartered in Orlando, Florida, also stated that the plans for larger enclosures are not a result of mounting pressure caused by the documentary ‘Blackfish’ but have been in the pipeline for some time.

The company's shares, which are trading near their lowest point since SeaWorld listed its stock on public markets last year, rose Friday. But it remains to be seen if the renovations will fully address concerns about keeping large marine mammals in captivity.

The 2013 documentary ‘Blackfish’ suggests that the conditions in which whales were being kept in at SeaWorld promotes violent behavior. It also suggested that SeaWorld’s treatment of the whales led to the death of trainers.

Since its release, a number of high-profile entertainers have declined to perform at the theme park, long-time marketing partner Southwest Airlines backed out of working with the company and SeaWorld stocks have plummeted.

Too Little, Too Late?

Amid ailing profits and negative public opinion, SeaWorld says it will build a tank with 10 million gallons of water at its San Diego Park, which is almost twice the size of the current tank with a depth of up to 50 feet. The new environment will be called the Blue World Project, and SeaWorld said it would include features that will be more stimulating for the whales, for example a fast water current that will allow them to swim against moving water.

According to reports the new facility will open to the public in 2018, and if successful SeaWorld will make similar changes at its Orlando, Florida and San Antonio parks.

The company said the cost of the project will be in the hundreds of millions of dollars but would not specify the exact budget.

SeaWorld is also pledging $10 million to support research focused on threats to killer whales, or orcas, in the wild. It also announced a $1.5 million commitment to a partnership focused on ocean health.

Despite these changes however, ‘Blackfish’ director Gabriela Cowperthwaite said the lives of the whales – nor public opinion – will improve. She stated that the size of the pool was not the only concern, but also the mental wellbeing of the animals in captivity.

“None of this would change in a bigger pool,” she said. “What people are upset about is that whales are not suitable to captivity.”

Cowperthwaite said SeaWorld should instead create oceanic sanctuaries that will let the whales live out their lives in more natural environments.

On Wednesday SeaWorld reported net income and revenue that fell short of Wall Street expectations and the company withdrew its financial outlook for the year. Its revenue in the second quarter was about $40 million less than analysts had expected, and the company acknowledged that ‘Blackfish’ hurt attendance.