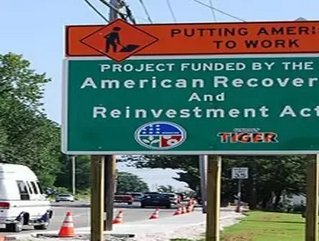 One year ago, congress passed the American Recovery and Reinvestment Act. Since then, $543 billion of the stimulus package (as its commonly called), or 57 percent of it, has gone into saving or creating jobs for Americans. The Obama administration says it has saved approximately 2 million jobs.

The ARRA, according to a report by Vice President Joe Biden, added a 2 to 3 percent growth in the GDP in the second quarter of 2009. In the third quarter it added 3 to 4 point growth and 1.5 to 3 percentage points in the fourth quarter.

Another indicator of the ARRA’s success is the lessening of payroll job losses. Since a peak in March in 2009, unemployment insurance claims have gone down steadily. According to the Biden report, the ARRA created jobs across every sector in every state.

Furthermore, the work has yet to be completed. According to Biden, the federal government will distribute $32 billion in Recovery Act funds per month. "Work on many Recovery Act projects will accelerate in the spring and summer months as weather conditions permit work on roads, bridges, water projects, and Superfund site clean ups,” he writes.

While Biden and many other Democrats praise the work of the Stimulus, many Republicans on the other side of the coin have dismissed it. "Taxpayers aren't getting their money's worth from the trillion-dollar 'stimulus' and struggling families and small businesses are rightly asking, 'Where are the jobs?'” said Republican Representative John Boehner.

Check out the complete Stimulus One Year report