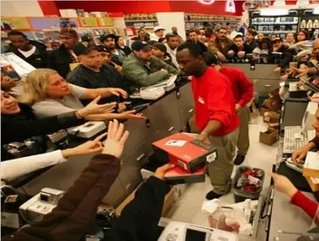 When Target announced that it would start Black Friday at midnight on Thanksgiving this year, the retailer seemed to delight shoppers but enrage employees.

Target employees across the nation have taken to the Internet to sign a petition on Change.org urging the company to open its doors later than planned so they may spend Thanksgiving at home and not behind a cash register.

The petition, addressed to Target Corporation President and CEO Gregg Steinhafel, was created by Anthony Hardwick, a Target employee in Omaha who works as a parking lot attendant.

“A midnight opening robs the hourly and in-store salary workers of time off with their families on Thanksgiving Day,” the petition reads. “By opening the doors at midnight Target is requiring team members to be in the store by 11 p.m. on Thanksgiving Day. A full holiday with family is not just for the elite of this nation—all Americans should be able to break bread with loved ones and get a good night’s rest on Thanksgiving!”

The protest has officially gone viral—it has attracted enough online attention to amass over 88,000 signatures. But the efforts of Hardwick and his compatriots will not likely move Target to alter its hours.

How to Leverage Social Media for Cyber Monday

“Black Friday is one of the busiest and most competitive shopping days of the year,” Target said in a statement released Tuesday. “We have heard from our guests that they want to shop Target following their Thanksgiving celebrations rather than only having the option of getting up in the middle of the night. By opening at midnight, we are making it easier than ever to deliver on our guests’ wants and needs.”

“We also do our best to work around the schedules of our team members, making every effort to accommodate their plans,” the company added. “Target will offer holiday pay to all hourly team members who work on Thanksgiving Day.”

The fact that competitors Macy’s, Best Buy and Kohl’s are also still planning to open at midnight and Walmart, Gap and Toys ‘R’ Us are starting Black Friday throughout Thanksgiving Day surely influenced Target’s final decision.

In 2010, a Target store in Buffalo, New York fired its chief of security after shoppers were trampled during the Black Friday opening: