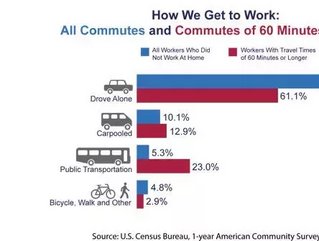 The US Census Bureau reported today on US workers commute statistics stating that 8.1 percent of employees have commutes of 60 minutes or longer and 600,000 have “megacommutes” that encompass 90 minutes and 50 miles. On average, the one way commute for US workers is 25.5 minutes.

These statistics come from the US Census Bureau’s annual American Community Survey which provides detail on a number of topics.

These figures paired with “Out of State and Long Commutes: 2011” data share an interesting picture of the daily commute. 23 percent of those employed with long commutes use public transit, in comparison to only 5.3 percent for all commuters. Leading the public transit commute is rail, accounting for 11.8 percent of commutes.

Other interesting statistics show that 79.9 percent of all workers who have to commute to work commute alone, while only 61.1 percent of long commuters do the same.

"The average travel time for workers who commute by public transportation is higher than that of workers who use other modes. For some workers, using transit is a necessity, but others simply choose a longer travel time over sitting in traffic," said Brian McKenzie, a Census Bureau statistician and author of the brief.

New York came in as the leading state for highest rate of long commutes, 16.2 percent, while Maryland followed closely at 14.8 percent and New Jersey came in at 14.6 percent. When commuting across county lines, 27.4 percent of American workers do so for their job. Counties with the highest percentage of workers traveling between them tended to be smaller with leaders in Virginia and Georgia.  A surprising statistic reported by the Census Bureau was the percentage of workers who travel across state lines for work, reaching one in ten of those employed.