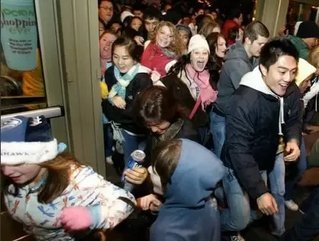 Last year, Walmart sensibly announced its holiday sales and prices three days before Thanksgiving. This time around, the mega-retailer has not only revealed its Black Friday deals two weeks ahead of the holiday on November 10, but also said that the sales will start as early as 10 pm Thanksgiving Day.

Walmart’s early Black Friday announcement and ad (www.walmart.com/cp/black-friday-2011/1076614) could be an attempt to jump ahead of competitors, but it’s also likely that Walmart is looking to drum up anticipation for a shopping holiday that’s lost a bit of its luster.

A survey by online shopping deals site Ebates.com revealed that this year’s shoppers are twice as likely to circumvent the madness of Black Friday by looking for similar deals online. Those who do visit stores in person still avoid the entire Thanksgiving Weekend.

The top three reasons shoppers indicated they will shop online this year were to get the best prices and deals, enjoy the convenience of shopping from home and avoid crowds.

Walmart isn’t the only store that’s made adjustments to its sale schedule in order to entice the masses—other retailers, including Target, Banana Republic and Macy’s, have announced plans to start the Black Friday festivities at midnight.

And although e-tail has gained an edge over traditional retail, online businesses aren’t resting on their laurels. Amazon got a jump start by launching an early Black Friday deals store last week and confirming consumers’ desires.

“When it comes to holiday gift shopping, there are three things customers want: low prices, items to be in-stock and ready to ship, and a convenient shopping experience,” said Amazon spokeswoman Sally Fouts in a statement. “Customers will find exceptional deals in our Black Friday deals store starting today all the way through Black Friday.”