Bacon, Anyone? The Stanley Cup You Want 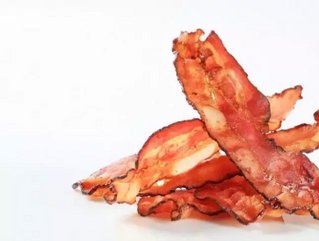 Are you a hockey fan? What about bacon? If you answered “yes” to both, then you may want to pay a visit to Bar Brutus, a local bar in Montreal’s east-end that has recently fashioned a Stanley Cup replica out of bacon!

When you consider NHL hockey, you most likely think about the Montreal Canadiens, the Stanley Cup or a combination of both—the coveted trophy and which team will be lucky enough or skilled enough to secure it. However, when the subject comes up now, you may start thinking about bacon. Already known for a menu that graciously utilizes bacon, Bar Brutus now has their own version of the Stanley Cup on full display.

Co-owner of the bar, Anthoni Jodoin, recently stated that in order to successfully make the trophy, 22 pounds of bacon were acquired and used. And though the cup is not edible, it will be on display throughout the entire playoff season.

If you can’t make it to Bar Brutus during this playoff season, then you can visit their Facebook page or Instagram account to view pictures of the masterpiece. Already proven to be quite popular on social media, the photo has well over 1,000 “likes.” If you had to choose, would you rather have the traditional trophy or the Stanley Cup that is made from bacon?
Last night, Montreal faced off against Ottawa for the first game and won—4 to 3. The second game will take place tomorrow night at Belle Centre.