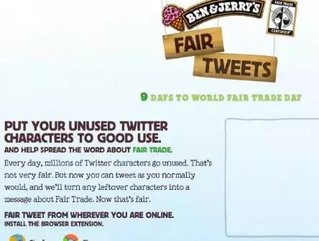 The “Fair Tweets” website and program helps workers from around the globe to receive fair treatment and pay from their employers. Users visit the website, type in their tweet, and Ben and Jerry’s will use their left over space to promote the program of fair trade and its benefits.

The website is pretty adorable and I’m already thinking of a witty tweet to use on the Fair Tweets website. The site says: “Every day, millions of Twitter characters go unused. That’s not very fair. But now you can tweet as you normally would, and we’ll turn any leftover characters into a message about Fair Trade. Now that’s fair.”

Ben and Jerry’s have cleverly jumped on the social media band wagon while also allowing their fans and followers to spread awareness about the cause. Twitter currently allows for sponsored ads, or what they call “Promoted Tweets” for thousands of dollars so this is a smart way to for the company to take advantage of advertising a cause, and essentially their product, with no advertising dollars.

Let’s see who the next person is to jump on the donated characters bandwagon.