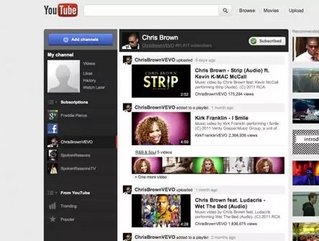 *This week, we're celebrating the end of 2011 by paying tribute to our most popular stories of the year. The countdown continues today with number three:

Sometimes you run into a golden preview in the tech world. And sometimes sites like Facebook, Google+, and YouTube launch beta examples to active users, but only for a split second…

Thanks to our ultra attentive Art Director, Freddie Pierce, we have found that golden preview.

Below is a screen shot of a possible change to the YouTube design and experience. Take a look:

From the image above we can make a few educated guesses about what Google has planned for the future of YouTube. The phrase of the day is: Social Media Friendly. The inclusion of Google+ and Facebook will make YouTube truer to its name- your channel, through your preferred social networking identity

It makes sense that Google owned YouTube would use this channel to give Google+ An edge over Facebook. With over 34,560 hours of video uploaded per day and over 3 billion views per day on YouTube, integrating a social element to the site might be the winning factor for Google.

Just see the Google+ button on the left hand of the profile screen image. This could mean YouTube channels will fall under the umbrella and social identity of your Google Profile.  In other words your Gmail, documents, Google+, calendars, and now even your YouTube channel will fall under one Google dashboard and login.

The Facebook tab in the screen shot also gives us a deeper glimpse into the new social YouTube experience. Quite simply, integrating your Facebook profile to YouTube equates not only more users- but more engaged users.

Once new users become engaged to the YouTube experience, via potential Facebook login, then Google has the opportunity to flip the tables and introduce those same users to Google+. Offering special customizable options to Google+ users on YouTube could play to their overall advantage as well.

Also, having a Facebook and Google+ on YouTube allows the site to import all your interests and likes to make personalized video recommendations. Marketers, advertisers, and viewers could all benefit from this change.

Though this change may not happen for some time, we welcome this added social element to YouTube!