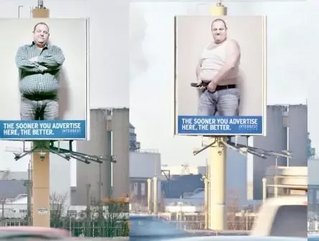 “The sooner you advertise here, the better,” is an advertising campaign that has been sweeping the Internet over the last few days and is definitely becoming viral. The Young and Rubicam Not Just Film advertising agency located in Amsterdam created this interesting out-of-home campaign.

Interbest Outdoor, a billboard agency that offers a variety of advertising opportunities around the Netherlands, has successfully filled their advertising space while winning an award in the process, proving that creative advertising  can lead to some phenomenal publicity because of this creative campaign.

As you can see, the campaign consisted of multiple billboards displaying a somewhat heavier man in a stripping sequence. These ads were changed daily and the campaign ended on this image. Clearly this was the final straw that caused an advertiser to sign up for the space.

Replacing the stripping man was an advertisement by Radio 2, saving many commuters from whatever was coming next.

The campaign also was successful in receiving recognition. It won the Gold for Best Out-of-Home Campaign at the Clios advertising award show. This award makes it clear that creative advertising pays off—not only in the lucrative sense, but also through acknowledgment.

Advertising like this is successful for one reason: its creativity. Photos of the billboards are spreading across the Internet like wildfire and not just amongst the advertising groups. The general Internet public’s awareness just goes to show how far creative advertising can go. This campaign not only advertised its product, but also has become entertainment to the masses.