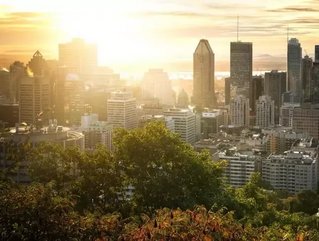 Montreal, the second-most populous city in Canada, is permeated with French colonial history dating back to the 16th century. Its economic history...

Montreal, the second-most populous city in Canada, is permeated with French colonial history dating back to the 16th century. Its economic history goes back to the fur trade, when the city’s position on the St Lawrence river was essential to its development as a transportation, manufacturing and financial centre.

Montreal’s contemporary economy is made up of a variety of sectors, including aerospace, pharmaceuticals, software engineering, telecommunications, textile manufacturing, tourism, transportation, a strong service sector, research and development, finance and higher education.

From the time of the confederation of Canada in 1867, Montreal was the largest metropolitan centre in the country, until it was overtaken by Toronto in the 1970s. It is still considered to be one of North America’s most cosmopolitan cities due to its popularity as an immigration destination.

Located in the French-Canadian province of Quebec, Montreal is often said to be the second-largest French-speaking city in the world, after Paris. Its economy, however, was historically dominated by an Anglophone minority.

It is a modern city, with great charm and vivacity, perhaps attributable to its lengthy history of immigration and infusions of culture. In its infancy, Montreal’s inhabitants were predominantly of British origin. As the growth of the city as a manufacturing hub led to an increased demand for labour, a number of labourers came from Europe which led to conflict with the existing French-Canadian workforce. The owners and controllers of the economy were, for the most part, Anglophones, while the Francophones worked in the factories, causing a social and economic divide which split the city. It created a linguistic partition along Boulevard Saint-Laurent, with Francophones to the east and Anglophones to the west.

An economic boom following the Second World War led to increased immigration from Europe, Asia, Africa and elsewhere in the Americas, transforming Montreal into the multicultural city it is today. Despite the city’s multi-faceted demography, French speakers still make up half of Montreal’s population.

Montreal’s economic momentum is powerful, growing year-on-year. In 2018, Greater Montreal enjoyed a 3.6% real growth in its GDP, while its unemployment rate reduced and the labour force participation rate grew to 67.5%. This is partly due to the influx of foreign investment and talent: the number of international students rose by over 6% in 2018, and many foreign businesses and workers have settled in the city, particularly in the high-tech sectors.

In the AI sector, companies such as Facebook AI Research (FAIR), Google Brain, DeepMind and Microsoft Research all have locations in Montreal, alongside some innovative start-ups.

One such start-up is Element AI. Founded in 2016, the company “gives organisations unparalleled access to cutting-edge technology.” The company helps accelerate the deployment and commercialisation of AI solutions, partnering with enterprises that want to utilise AI but lack expertise, and maintains a strong connection to academia to continue developing AI-powered solutions. It also takes a leadership position in policy-making around the impact of technology on society, a hotly-discussed subject as AI solutions become more mainstream. Element AI recently raised CA$200mn (US$151mn) in a series B round of funding, and its investors include Gouvernement du Québec, Data Collective (DCVC), and McKinsey & Company.

The video game industry in Montreal has been rapidly growing since 1997 and the opening of Ubisoft Montreal. The game design studio produced 2002’s Tom Clancy’s Splinter Cell and 2003’s Prince of Persia: The Sands of Time, and has since developed its own intellectual properties such as Assassin’s Creed, Far Cry and Watch Dogs. It now employs more than 3,500 people, and is one of the largest AAA studios in the world.

Its establishment is considered to have had a massive effect on the economy of Montreal. It helped establish the city’s position as a creative hub, and has encouraged other publishers such as Electronic Arts, Eidos Interactive, THQ and Warner Bros to open studios there. The Quebec and federal governments offer subsidiary programs to support high-tech job creation.

Montreal is ranked in the top five game development cities by the Game Industry Career Guide, along with Tokyo, London, San Francisco and Austin.

Transport is an integral aspect of Montreal’s economy. The Port of Montreal is the largest inland port in the world, handling 26mn tonnes of cargo annually. It is a trans-shipment point for grain, sugar, machinery, petroleum products and consumer goods, and this large quantity and variety of cargo has also made Montreal the railway hub of Canada.

The city is home to the Canadian National Railway headquarters, along with other rail transport companies such as Via Rail. Via are mandated to operate intercity passenger rail services across Canada, and are subsidised by Transport Canada.

Air Canada, the country’s largest airline, are also headquartered in Montreal. It was originally founded in 1937, and provides air transport for passengers and cargo to 207 countries.

Another business of note in Montreal’s transport sector is aerospace and transport engineering company Bombardier Inc. The company entered the aerospace field in 1986, after a history of involvement in the snow transport and rapid transit locomotives sectors. It now operates through four segments: Business Aircraft, Commercial Aircraft, Aerostructures and Engineering Services, and Transportation, designing and manufacturing a variety of aircraft and aircraft structural components. It still offers a portfolio of products and services to the rail industry.