Daily Deals on Your Smartphone 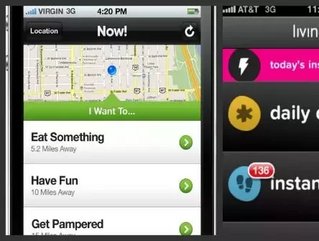 Groupon is arguably the biggest deals provider on the web and the company has used its clout to launch Groupon Now!—an application that offers time-specific daily deals based on GPS location.

The Groupon Now! app is synced with your Groupon account, so when you download it to your smartphone, your credit card and account information is automatically transferred. When accessed on a smartphone, Groupon Now!’s simple interface offers two categories for deals: “I’m Hungry” and “I’m Bored.”

The deals listed in each category correspond to the user’s smartphone GPS, so they can be redeemed for vendors in the immediate vicinity.

So, if you’re going to lunch and looking for an instant bargain, you just have to head out to the street and pull up Groupon Now! on your phone to connect with a local, affordable option.

On the web, Groupon organizes the instant deals into categories based on the things people like to do, like massages in “Get Pampered”, teeth whitening in “Take Care of Myself” and discovery flights in “Have Fun.” There are also self-explanatory categories like “Eat Something”, “Get Flowers” and “Take a Class.”

Unlike the regular Groupon Daily Deal, Groupon Now! deals are only available for limited amounts of time—typically two or three hours, when vendors are looking to fill their seats.

Groupon Now! presents a win-win situation for consumers and local businesses—the consumers get great, relevant and useful deals, and merchants can take advantage of the opportunity to boost sales and offer deals on slow business days.

“We want people to think about Groupon every time they walk out the door,” Groupon Founder and CEO Andrew Mason told Bloomberg Businessweek.

“For merchants, the daily deal is like teeth whitening, and Groupon Now! Is like brushing your teeth. It can be an everyday thing to keep your business going.”

Although LivingSocial was founded before Groupon, the company didn’t start offering daily deals until Groupon took off. Since then, history has proven that any time Groupon leaps, LivingSocial follows (it’s not as if it has much of a choice, anyhow).

Similarly to Groupon Now!, LivingSocial Instant serves up real-time deals that are redeemable at local vendors and available for limited windows of time. LivingSocial Instant is currently only available in Washington D.C., New York and San Francisco, but the company plans to roll-out to more U.S. locations in coming months.

LivingSocial celebrated its launch in all three cities with a Dollar Lunch Day promotion, which sent instant $1 lunch offers within walking distance to smartphones with the app within city limits.

LivingSocial commits to increasing profitability for partner merchants by aligning them with a local contact who works with them to determine a marketable offer structure.

Say you want to buy an iPad, a concert for your office or even a spacesuit but you yearn for the simplicity of touch-screen picking and choosing from your mobile phone.

Zaarly operates much like an ultra-hip, technologically superior hybrid of Craigslist and eBay. It’s a localized, auction-style marketplace that allows users to search for and purchase items from other users on their smartphones.

As with Craigslist, users can make requests for whatever their hearts fancy, no matter how bizarre they may be.

“We facilitate in-person transactions so it is hyper-local in the truest sense,” said one of Zaarly’s founders, Bo Fishback. “If you want to pay $50 for someone to bring you a pizza and you want it in the next 45 minutes, you post it on Zaarly and we make sure it gets as broadly syndicated as possible. People who are willing to fulfill that order for you, in that amount of time, for that amount of money, can make it happen.”

The startup company was founded by Fishback, Eric Koester and Ian Hunter during a 54-hour cram session at February’s Los Angeles Startup Weekend competition. Within three weeks, Zaarly went live during the 2011 South by Southwest Festival in Austin, Texas.

Earlier this year, Zaarly rounded up $1 million in funding from some angel investors, including Ashton Kutcher and Lightbank, a venture fund created by the founders of Groupon.