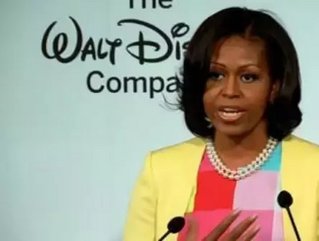 Walt Disney Co, the media giant that owns the ABC-TV network and several cable channels, has announced that it will no longer accept some junk-food advertising on its children’s programming outlets. The company will launch its own “Mickey Check” label to promote nutritious, approved foods.

The plan, announced by Disney CEO Bob Iger and First Lady Michelle Obama in Washington Tuesday, will be in full effect by 2015.

"With this new initiative, Disney is doing what no major media company has ever done before in the US--and what I hope every company will do going forward," Obama said.

Statistics show that nearly one-third of children in the US are either overweight or obese and junk-food marketing has been linked to childhood obesity by the Institute of Medicine.

Disney has been making moves to disassociate its brand with bad nutrition since 2006, when it introduced voluntary guidelines to prohibit licensing of its characters for foods that do not meet minimum nutrition requirements.

“We’re taking the next important step forward by setting new food advertising standards for kids,” said Iger in a statement. “The emotional connection kids have to our characters and stories gives us a unique opportunity to continue to inspire and encourage them to lead healthier lives.”

The new plan includes cutting junk-food advertising during children’s programming and on websites intended for children, based on guidelines that set limits on the number of calories and amount of fat and added sugar in foods.

“Disney’s announcement is welcome news to parents and health experts concerned about childhood obesity and nutrition,” said Margo Wootan, nutrition policy director at the Center for Science in the Public Interest. “This puts Disney ahead of the pack of media outlets and should be a wake-up call to Nickelodeon and Cartoon Network to do the same.”