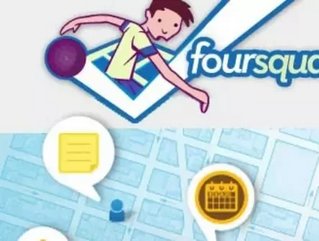 Foursquare is one of those social media networking sites that you either love or hate. It’s great for those junkies who want to show off to friends where they’re at, gain invisible badges to store in your phone, or look for discounts and freebies to neighboring restaurants, cafes and so on and so forth. Foursquare is the “OG” when it comes to checking in social sites and Facebook and Google have both borrowed the idea to create their own network of places to check into and share with friends and followers.

After all of the copycats, Foursquare has still held its ground and the company has announced this week that it has hit 10 million registered users. Today, the company says that it has plans to introduce its largest partnership to date with American Express to offer discounts to cardholders when they check in using their smartphones at participating restaurants and shops.

Foursquare’s partnership with American Express will offer more hearty deals to users and executives are hoping that the social media app will bring it further into the mainstream. However, the New York Times reports that Foursquare will not be receiving any revenue from the American Express deal, but will leverage the promotion to legitimize the company’s approach and to attract future, lucrative partnerships.

If you’re eager to start checking in to get deals with your American Express card, the first companies on the plate will be Sports Authority and clothing chain H&M, along with a few restaurants in New York. Shoppers who spend $75 at H&M will get a $10 credit to their credit card account and those who spend $50 at Sports Authority will get a $20 reward.