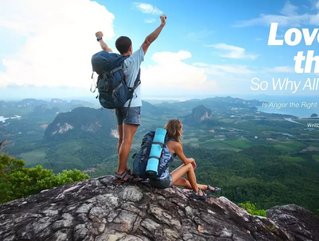 Are these lines from an afternoon soap? Maybe they’re from another distraught Lifetime movie? Or perhaps they introduce a melodrama 101 course at a junior college?

Nope. These are all closing lines from current spots for three separate brands: Acura, Sprint and DIRECTV, respectively. Each of these lines is delivered by a spouse whose marriage is seemingly on the brink of disaster. These relationships appear to be rushing towards the cliff. And the thought of sharing data or DVR storage is just one more brick tossed onto the exasperation pile.

When I first encountered these commercials, I was struck with one lingering emotion: sadness. Why is everyone so angry and internally bitter? Yes, each ad is directed, acted and produced beautifully. But though humor is the intent, each spot just left me sad. And these days, who has the budget to spend millions on media and production just to nail “sad”? Experiencing the pain captured in these commercials is as uncomfortable as being a kid watching your friend’s parents fight. It’s a feeling that makes you just want to disappear.

According to Philip Kotler, Ph.D., “while reason does lead us to conclusions, emotions are the ones that lead to action.” [Source: B2B Brand Management, 2006] YouTube superstar and TED conference keynote, Simon Sinek, has made similar claims with his theory that “people don’t buy what you do; they buy why you do it.”

Emotional advertising, or the ability of a brand to connect its value proposition to the personal needs and desires of its target audience, has taken root in the modern marketing communications landscape. Thanks to the industry’s enhanced ability to understand buyers and the personal feelings that impact their purchase decisions, all types of brands across the B2B and B2C spectrum have been successful at appealing to the pathos of consumers and business decision-makers.

So while the goal of creating an emotional bond between the target and the brand is the advertiser’s Holy Grail, choosing the wrong emotion seems to be a path that, instead of forming a bond, just widens the gap. It’s a wonder that Acura, Sprint and DIRECTV didn’t take a different tack. What kind of results do they expect to get when appealing to humanity’s darker side? What emotional purchase decision are these companies hoping to influence by showing loveless couples?

I’m pretty sure that messages of anger and restlessness are going to be quickly discarded. A reaction of sadness, or “that was icky,” is not the most motivating reaction, and doesn’t likely translate to ROI.

Sure, humor is a great creative device to set the hook, but the type of humor leveraged by Acura, Sprint and DIRECTV ventures into the desperate side of the human psyche. I’ll take a smile over a grimace any day. And I’m sure a glimmer of hope works harder than a hint of despair.

But here’s the thing, dark humor can work if done right. For example, take a look at the new Healthy ChoiceTV spots which feature people whose lives have been derailed by fad diets. The tone of each commercial is moody, but by dramatizing the length to which consumers will go for a diet, Healthy Choice gets people to laugh at themselves. They’re able to make fun of their target audience in a way that actually resonates! They created an emotional connection.

In the end, the most memorable ads are those that effectively seduce the consumer into feeling good about a product or brand. Anger doesn’t make anyone feel good about anything. And as an emotion, it creates barriers, not bonds. And when you’re spending millions on advertising that creates barriers, that should make any CMO, well, angry.

CREDIT LINE:  Bernie Pitzel is the Creative in Residence at Jacobs Agency, the award-winning, Chicago-based agency that helps companies untangle their business problems through marketing communications. Pitzel has been the creative force behind famous campaigns such as Gatorade’s “Be like Mike” and ATA’s “On ATA, You’re on Vacation.”