Miley Cyrus proves there is no such thing as bad publicity 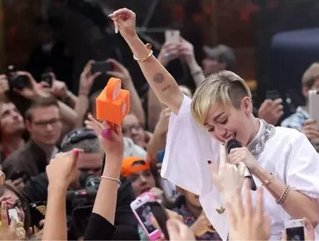 Let’s talk Miley Cyrus. Bear with me. Love her or hate her you know about her and her outlandish antics, whether its twerking against Robin Thicke at the VMAs, straddling a wrecking ball completely starkers, or just sticking her long pointy tongue out at any possible opportunity.

We have heard so much about the once innocent Disney child star that there is barely room to talk about any other young entertainer. She is the one-and-only person magazines want to score an interview with. Rolling Stone interviewed her; Saturday Night Live bagged her as their artist of the week – and its not like she has a whole lot to say.

People want to know ‘Why did you wear that outfit at the VMAs?’ ‘Why do you stick your tongue out?’ ‘Are you on or off or on or off with Liam Hemsworth?’ And get this, her responses are not exactly ground breaking either, nor is she the most interesting woman in the world. ‘I wore that outfit on the VMAs to make a statement, hate me’ ‘I stick my tongue out because I like sticking my tongue out’ ‘I won’t talk about my private life in the media.’ Yawn. The girl isn’t even that interesting.

So why then, when you type ‘Miley Cyrus’ into Google do you see 103,000,000 results (0.19 seconds). How has this pop princess come hip-hop bad ass captured the attention of the media is such an overwhelming way?

Miley Cyrus has had a head start on most of us mere mortals; having grown up in the media spotlight, she now has a platform from which to project her newfound image. However she has succeeded where others have failed. Dare I mention Amanda Bynes? She has also managed to cause a media furore without having the talent to warrant it. I would argue that Hannah Montana was an average TV show and Miley Cyrus has blossomed into an okay female artist. As PR expert Robert Wynne says in Forbes, “Both Britney Spears and Christina Aguilera parlayed the young, innocent child star to sexy young singing sensation, but they are both far better singers.  That makes Cyrus’ ascent much more noteworthy.”

And an ascent it has been. Many critics have claimed that she is heading on a downward spiral. Sarah Marie Brenner went as far to say, “Watching a train wreck is painful and unavoidable. The Miley Cyrus VMA performance was a precursor to a wreck that is surely to happen. And it’s hard to see it as anything but sad,” and she is not alone in this belief. But train wreck, really? Miley’s career since supposedly ‘embarrassing,’ ‘shaming,’ and ‘ruining’ herself on stage that night has soared.

Rolling Stone not only gave her a place on its coveted annual ‘Hot List’ but put her face of the cover. ‘Wrecking Ball’ (the one where she ‘provocatively’ licks a sledge hammer in the video) reached number one in the US and ‘We Can’t Stop’ peaked at number two in August. Since her supposed career wrecking performance, Cyrus has reached a whole new level of stardom.

Billboard noted that her ‘controversy’ is more than likely a well-planned PR campaign, and Opposing Views takes it further, calling Cyrus a ‘public relations genius’. I sit on this side of the fence. To me its clear and obvious that Miley has a team of marketing gurus sitting behind the side lines, telling her to stick out her tongue, advising her what to wear, who to collaborate with and teaching her how to make video after video full of GIF fodder. This is all part of a calculated ploy to bury her formerly squeaky-clean Disney image. The end result, says the New York Times, is to reveal her inner “bad b***h”. Because let’s face it, b*****s these days sell way more records that Disney princesses.

Dare I suggest it; could we learn something from her perfectly executed PR campaign? Not all of us want to be rocking the world and selling albums with names like ‘Bangerz’ but when it comes to building your brand the number one objective it to get your name out there.

Entrepreneurs and business owners listen up. Here is the Miley Cyrus guide to getting your brand noticed.

Don’t be afraid to break the rules

Be controversial and don’t be too afraid to overstep the mark every now and again. It has been said before and it will be said again, “There is no such thing as bad publicity.” Look at the young videographer who tried to name and shame her employer by creating a leaving video grumbling about poor working conditions. Rather than causing the business to nosedive into obscurity, she probably just handed them the best PR campaign on a platter. They came back with a witty response and suddenly everyone is talking about the little know animation company, Next Media Animation.

Take Lady Gaga’s meat dress, the Madonna and Britney kiss, Paris Hilton’s acting debut in One Night in Paris, nothing but more publicity came from these well-executed publicity stunts. Proceed with caution when it comes to rolling out a controversial PR strategy, and avoid anything too offensive. But push the boundaries and dare to be heard, it could pay dividends.

This is one of the oldest tricks in the book and we don’t need young Miley and her mischievous foam finger to remind us of that. Just look at all the food and drink, clothing and music brands that have shocked us with super tight jeans, burgers being eaten provocatively and young women smothered in baby oil.

Sex sells, because we still get so riled by it. Launch an advert of a young woman languished on the hood of a car and you will have a million and one feminists waiting in the wings to spread the word of your new product for you. Again, this is not right for every brand, but some have pulled it off perfectly.

Whatever PR campaign you run, its not going to appeal to everyone. Fact. So know your audience. Have you noticed that the vast majority of Miley bashers are over 30 years of age? They hated her performance on the VMAs and they think even less of her hot to crop fashion sense (hot pants and crop tops!), but does Miley care? Of course she doesn’t. They were never going to be the people buying her albums anyway. What she does care about though is that every young girl between the ages of 12 and 18 are talking about her performance. Apparently they loved it and to Cyrus and her team that is all that matters. This is a hugely important lesson to all marketing managers – find out who your audience is, know your target market and target them. Target them and them alone.

Make yourself (or your company) into a brand and shout about it from the rooftops. I was told once that you have to blow your own trumpet when writing your resume, because nobody else will do it for you. Well consider social media to be your public resume. Miley Cyrus has over 14 million Twitter followers and that didn’t happen by accident.

Take notes from those who have succeeded before you

Miley Cyrus is not the first young woman to try and shake her demure image in exchange for a much vampire one. In fact, she is not even the first to wriggle out of the Disney skin, opting for a much sexier alternative – take Britney and Christina as perfect examples. She has been very savvy when it comes to launching her campaign, by taking note from others who have achieved success. Not only can she see that the method can work, but she is also closely aligning herself with global superstars. “Miley Cyrus follows in the footsteps of Britney Spears” must come as music to her ears. Britney is still rocking it, two children, two marriages and 31 years later.

The saying, “It’s who you know not what you know,” also comes into play here. Have you noticed that Cyrus has stopped hanging out with Selena Gomez and Ashley Tisdale and today favors the company of guys with names like Juicy J and Wiz Khalifa? By ditching her past and aligning herself with different artists, Miley is gaining respect in the scene she wants to break into.

Don’t be afraid of timely reinvention

And lastly, don’t be afraid to give your brand a facelift every now and then to get people talking. Hannah Montana cut her hair, added tattoos and started rocking a gold chain. A radical transformation is not always a necessity, but a timely update has saved many an ailing brand.

Just you wait, a few months down the line, once she has proven her point, I would put big money on Cyrus strutting into a press conference in a sophisticated dress and heels. She will be oh so willing to tell us that the twerking and tongue pointing was just an ‘adolescent phase’ and she is now ready to be accepted as a ‘serious artist’.

Miley Cyrus isn’t a train wreck waiting to happen, she isn’t original and she won’t be the last teen idol to shock us with provocative dance moves and drug use. The girl is clever, she has her head screwed on and she is just following the script for maximizing PR.

Originally published in the ambitionist.com