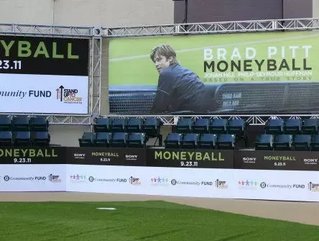 First, a quick Moneyball refresher. Traditionally, major league baseball teams assumed that a roster of players with great numbers for batting average, stolen bases, runs batted in and home runs was the key to winning. Rich teams spent big money to sign the top performers, while poor teams, who too often saw their best players poached by the big boys, struggled in the standings.

With the 2002 season looming, the Oakland A’s led by general manager Billy Beane knew they couldn’t compete with the richest teams on player salaries. They looked hard at their budget to find a way to get more wins with less. They dug into the data using counterintuitive metrics - primarily on-base percentage - to find players who produced more than their modest price tags suggested. The experiment was this: How would a whole team of these overlooked, cost -effective performers fare?

The 2002 A’s finished first in their division, won a league-high 103 games and posted a record 20-game winning streak. And data now drives baseball.

Marketing is at a similar crossroads. The past 50 years have been defined by plunking down big dollars for TV and other “heavy hitters.” Today, marketers have a world of options for “getting on base” and connecting with customers. Yet despite the rise of Big Data (data, data everywhere!), a recent survey shows marketers’ use of data falling over the last two years. To not get stuck in the data weeds, focus on a few smart, diagnostic metrics (your equivalent of on-base percentage). If you want to be a relevant marketing leader in the next five years, you need to play by the rules of Moneyball Marketing.

LOOK BEYOND THE BLING TO THE WORKHORSES

The former catcher who could hardly throw and just released by another team wasn’t “hot,” but he had a history of getting on base. When the Oakland A’s signed him and converted him to first base, he delivered reliably. Marketers tend to focus on TV ads  and high-concept campaigns. But in the Moneyball  Marketing mentality you ask, What works? What drives results? And at what cost? Which leads to...

USE COST AS THE NORMALIZER

DON’T JUST AIM FOR HOME RUNS, GET ON BASE

In baseball, wins are the ideal outcome. In marketing, it’s revenue. So just do the stuff that drives the most revenue, right? Easier said than done. But you know you won’t get revenue if no one is aware of your brand. And you won’t get revenue if you don’t engage those who are aware of you. These are factors you can optimize around. In other words, even if certain marketing efforts don’t have direct revenue attributed to them, you’re not off the hook for being a data-driven, Moneyball Marketer. You should still be driving awareness and engagement cost-effectively.

DECIDE ON YOUR KPIS UP FRONT

The Oakland A’s were clear at the outset about the key performance indicator they would use to judge players, which made decisions straightforward. In marketing, when you decide upfront how you’ll judge your efforts, decisions become clear. No matter what you set out to do, no matter what channel - an email, an event, a TV ad - decide before you begin the KPIs or criteria by which it will be judged.

NO ONE PLAYER WINS GAMES

Optimizing marketing results has no single silver bullet. Your brand is created by the millions of individual experiences customers have with you. And optimizing your marketing results is going to happen via a hundred small optimizations - shifting budget over time from underperforming tactics / channels  / agencies / campaigns (again, from  a cost-effectiveness perspective) to over-performers. Which brings us to...

THE PERFECT IS THE ENEMY OF THE GOOD

Billy Beane couldn’t be certain which of his Moneyball signings would work out. But that didn’t stop him. General managers trade players, bring new players up and send others down all the time. Once you’ve confirmed what you’re optimizing for, get going. Then, watch your marketing mix performance closely and make sure your team is always optimizing. Postponing the question of “did my marketing work” until year-end is like waiting until the baseball season is over before taking action to win more games.

ARE YOU A MONEYBALL MARKETER?

The era of data-driven marketing is here. And the Billy Beanes of the marketing world will be the sought-after marketing leaders over the next five years. With a Moneyball mindset and the right team and tools by your side, you’ll be on your way.