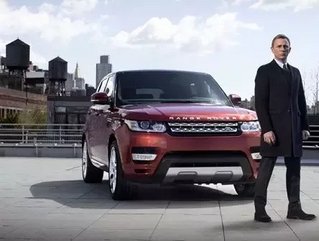 Yesterday, Land Rover debuted the all-new Range Rover Sport through a live event in which Daniel Craig drove the vehicle through the streets of Manhattan.

“The all-new Range Rover Sport is an extraordinary car and we have revealed it in an extraordinary way – live on the streets of its biggest selling market. It turned heads and stopped traffic in one of the most dynamic cities in the world,” said John Edwards, Global Brand Director, Land Rover.

The Range Rover Sport is “the fastest, most agile and responsive Land Rover ever,” and Land Rover  saw the Manhattan skyline as the perfect backdrop for its world premiere, specifically due to the fact that New York is Range Rover’s best-selling city. The Range Rover Sport features a new lightweight suspension design through its aluminum architecture which enables the vehicle to provide agile handling and a comfortable driving experience.

"The all-new Range Rover Sport is a vehicle that has been designed and engineered without compromise.  With Land Rover capability at its heart, it is one of the most road focused vehicles we've ever produced, but of course still offers unsurpassed all-terrain capability. It is a vehicle which is designed to be driven. We've taken ride, handling and agility to another level for Land Rover to deliver a truly rewarding, sporting, drive together with unmatched luxury, capability and versatility,” said Edwards. "Building on the success of the recently launched flagship Range Rover, the new Range Rover Sport also employs a vast array of new technologies which help to transform its performance, refinement and all round capabilities.”

Also highlighted at the event was Daniel Craig’s and Land Rover’s commitment to S.A.F.E, a Kenyan charity that uses “street theater and community programs to educate, inspire and deliver social change.” Land Rover donated the Land Rover Defender to S.A.F.E. four years ago and will donate another vehicle to the charity later in 2013.