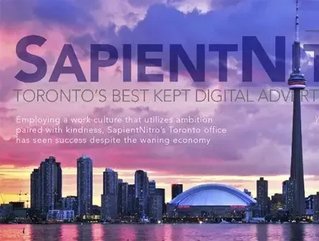 A digital agency that has learned to evolve within the industry, SapientNtiro thinks differently than most traditional agencies. Instead of creating a campaign that’s based on tradition with digital on the side, SapientNitro’s Toronto office collaborates with all of its employees at the beginning of the creative process.

“I think the Sapient model is a good example of a convergence model. As opposed to having the idea upfront and then tacking on all the different ways to apply it, we get all the right people into the room before coming up with the idea. This leads to the convergence of the various disciplines and the various channels before we come to the idea. That’s where I think the model has been really, really successful for us. There isn’t that kind of division of labour or this sort of assembly line methodology of old school traditional advertising,” says Elliott Smith, Creative Director, SapientNitro’s Toronto office.

This model is backed by SapientNitro’s overall operations. The company does not see its Canadian office as a satellite office, but in reality SapientNitro has created  fluidity within its company that prevents the separation of offices into different entities.

“Typically with ad agencies there’s a lead office, the New York office, and sister satellite offices. Normally, there’s friction between those offices because the big one gets to call the shots. There’s more friction that way. But because SapientNitro is so equal and we have our own assignments to run, there’s a lot more collaboration then you’d expect,” said Steven Koch, Associate Creative Director, SapientNitro’s Toronto office.

Whether from a US influence, or just created as an overall part of SapientNitro’s identity, the company employs a work culture that equals bold ambition paired with kindness. This attribute has led to company success despite a slow economy.

“There are lots of ambitious companies where everyone’s mean and they have the rock star culture while there are the companies that are very nice, but they usually go out of business because they’re just not hungry enough. Sapient is this lovely combination where we’re super ambitious, we just want to grow and we want to win everything. We’re hyper-competitive, but we know it has to be done with kindness,” said Smith.

SapientNitro’s Toronto office reflects that ambitious/kindness culture in the way they’ve handled their Jeep.com account. A truly global program, SapientNitro took a different approach from the norm and created a program for Jeep to follow toward digital success.

“Typically, SapientNitro has been building microsites for Jeep, but they came to us explaining ‘We don’t need that, we can do our own. Give us a program that we can follow.’ This meant building something that will continue despite participation—if one region wants to opt out, the whole thing doesn’t collapse. I think we’ve done that. It’ll be socially interactive, there will be contests, it’ll be tactile and we tried to design it for mobile pieces,” said Koch.

Another example of success with Jeep was their Name My Ride program. Advertising a limited edition vehicle that was so far unnamed, SapientNitro created a “Name My Ride” contest that allowed fans to submit vehicle name suggestions. Near completion, the contest narrowed down suggestions to the top three in which fans could vote upon. The winning entry would not only become the name of the vehicle but also, the person who submitted the winning entry would win the Jeep.

SapientNitro’s Toronto office offers a truly credible advertising solution to its clients. Understanding the need to evolve within the industry to survive, it’s clear SapientNitro will be a force to be reckoned with for years to come.