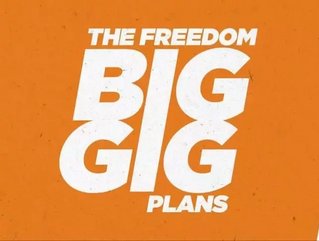 Shaw Communication Inc.’s subsidiary, Freedom Mobile, has announced the launch of a new plan for customers named Big Gig, offering 10GB of data at a rate of $50.

Released this week, the plan aims to expand Freedom Mobile’s market share by offering a plan much cheaper than the leading three providers within Canada. Comparatively, own-device plans from the first and second tier bands of competitors all charge at least $115 for 10GB.

“Simply put, the Big Gig plans are a total game changer in the Canadian wireless industry,” said Paul McAleese, Chief Operating Officer, Freedom Mobile. “Offering our customers access to this much data on our new LTE network resets the marketplace and redefines what Canadians should be paying for data.”

The move is a significant challenge to the three major national providers of Rogers, Bell and Telus, with Freedom Mobile attempting to grab a more significant market share, the company’s first major move since Shaw bought and renamed the company in 2016 for $1.6bn.

“Big Gig will be a loud and unprecedented, in-your-face campaign that makes it clear to Canadians that they have a choice that doesn’t include costly overages or top-ups each month,” said Katherine Emberly, Senior Vice President Marketing at Shaw Communications.

“Until now, the approach to wireless data pricing has been deliberately punitive, and out of line with customer usage. We want Freedom Mobile customers to stay connected to whatever content they love as long as they want,” McAleese said. “Better wireless prices for Canadians will only come through competition without compromise. Our Big Gig plans don’t compromise on price or value, so our customers don’t have to compromise on using their data.”