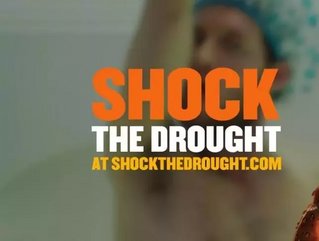 How focused has your business been on the concept of corporate social responsibility? Has your team been doing its part to make the world a better place?

If not, you may want to consider getting started. In addition to the feel-good aspect of contributing toward a more positive planet, it’s also a great way to build partnerships and connect with your consumers.

The beer brand recently announced the launch of Shock the Drought, a CSR campaign partnering with IndieGogo and various California-based non-profit organizations to identify and support new ways to help consumers exercise water conservation and bring some drought relief to California.

According to Jake Kirsch, Anheuser-Busch VP and leader of the brand, Shock Top chose the California drought as a CSR issue to pursue in large part because of the beer’s California roots and its strong fan base within the state:

"One out of every four Shock Tops sold in the country is sold in California, and 95 percent of our flagship Belgian white brand is brewed in California, so we’re really rooted in the state and have been for a long time," he explained.

The Shock the Drought campaign will be funding various campaigns currently aiming to save water in different ways, and it’s starting its campaign with a $100,000 donation to Drop-A-Brick, an invention described as “a modern, eco-friendly innovation that sprang from the classic drought tactic of placing a real brick in a toilet’s tank to save water.”

Project: Drop-A-Brick originally sought funding on IndieGogo in 2014, and Shock Top’s support is helping the brand scale up its production and supply 10,000 free Drop-A-Brick 2.0 water savers to consumers interested in doing their part to save water.

According to estimates, that funding should help everyday California people save millions of gallons of water each year. IndieGogo added to Anheuser-Busch’s press release to express its excitement about partnering with Shock Top on this project:

“Indiegogo empowers a global community of changemakers to turn their ideas of today into the innovative products of tomorrow,” said Jerry Needel, senior vice president of sales and market development at Indiegogo. “As a California-based company, we’re proud to be the crowdfunding platform fueling Shock Top’s efforts to identify and bring water conservation technologies to life.”

Moving forward, Shock the Drought’s FAQ states that the CSR campaign will be working with California-based water conservation efforts like Save Our Water and Save the Drop to identify other breakthrough water-saving innovations on IndieGogo, and will put from $50,000 to $100,000 toward potentially impactful projects throughout the year. Furthermore, consumer engagement and heavy social media promotion aim to bring awareness to the issue.

A smart CSR campaign is one that is engaging and appeals to consumers, addresses an issue that is affecting and of concern for your demographic, and can make a real change that consumers can see.

With this new project, Shock Top and AB InBev seem to be hitting the mark.