Social Media Mind And The Future of Capitalism 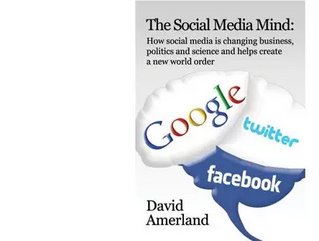 Whether you believe that this is the age of social media or, as the heads of State at the World Economic Forum in Davos labelled it: “…the age of damage" where "social media creates a world of radical transparency", the fact is that the world is in a state of transition where social media acts as a catalyst bringing around rapid change.

To understand the impact social media is having, it is necessary to understand what drives it, what is different about it and how its adoption affects the traditional way of doing things. The Social Media Mind is a book that covers not just the practicalities behind the employment of social media as a marketing tool but also the theory which drives its constant expansion.

As author David Amerland explains: “In the 21st century we face challenges which we have never faced before and they are all the result of incremental gains in our technology and rapid advances in online platforms. The cumulative advances we have made have now reached a critical point which is making itself felt in the devastating impact social media is having upon our society at almost every level. We saw the Arab Spring uprising where social media played a central role, we have seen major brands from PayPal to Virgin America, Qantas and Blackberry, suffer total social media meltdown and even at the Davos World Economic Forum, summit social media brought about questions regarding the future of Capitalism, as we know it.”

This means that businesses which adopt social media marketing can no longer rely upon the conventional approach of creating a presence on Facebook, Twitter or Google Plus and then doing “business as usual”. They need to radically re-think their approach and core values and work out ways which will engage their online audience through genuine online discussions revolving around mutual interests.

“Social media is all about telling a story,” says David Amerland, “but to succeed you need to be able to tell the right kind of story and for that to happen you need to make sure you understand what your story really is.”  This is something which The Social Media Mind can help you do, highlighting the pitfalls to avoid along the way and outlining the opportunities.

In this decade many things will radically change. From the way we relate to our governments to the way we look for work and the way we work online, Social Media is central to all this and its role is only going to become more and more crucial. Early adopters will definitely have an edge over their competitors.