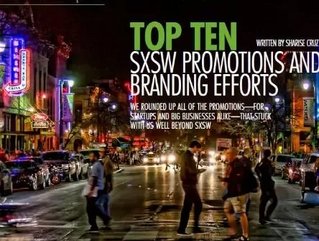 SXSW’s most controversial product, New York ad agency BBH’s “Homeless Hotspots” initiative, was as striking as it was divisive. Whether you side with those who thought the idea of using homeless people as wireless transmitters was dehumanizing or you’re with those who thought was harmless positivity, it’s hard to deny that it was an emotion-invoking, passion-fueling promotion. The buzz quickly fizzled, however, and BBH nixed the idea altogether after its SXSW trial debut.

Highlight is the location-based social connection app that became the obsession of SXSW Interactive this year. According to Mashable’s mRank leaderboard, Highlight was the most talked-about startup mentioned on Twitter, Facebook and blogs. And those who somehow didn’t catch any of Highlight’s documented buzz were drawn like moths to the neon-painted, boom box blasting shopping carts circulating the event.

It’s one thing to take to the streets with a mobile billboard, but HootSuite did SXSW one better by navigating the streets of Austin in a bus outfitted with a giant owl. It was instantly recognizable and just weird enough to stand out in Austin without freaking people out. Plus, HootSuite employees were given access to loads of “HootSwag,” including t-shirts and scarves, to be shot at passersby through a CO2-powered “HootCannon.”

When attending an event as action-packed as SXSW, the best laid schemes—including keeping your phone alive all day—go often awry. Every year since 2010, AT&T has come to the rescue by supplying chargers for festival-goers. This year, the chargers were rigged inside of candy-coated lockers, allowing people to secure their phones under lock and key, step away to attend a party or panel, and return to a fully-charged battery.

This year, the team behind Foodspotting hosted its 3rd annual SXSW Street Food Fest, attracting 5,000 people and giving them good reason to download the free Foodspotting app. The event included a lounge with karaoke, giveways and contests, an eating contest with champion eater Takeru Kobayashi and, naturally, a full range of the best food trucks Austin has to offer, serving chicken and waffle tacos, kimchi fries and a ton of other delights.

As one of SXSW Interactive’s sponsors, PepsiCo was omnipresent throughout the event, but the company further made its mark on the entire conference by engaging attendees with digital, music and film experiences. From the Mountain Dew DEWeezy project to Doritos’ nearly six-story-tall vending machine/stage and much-hyped music performances on said stage, to the “What If? Unconference” devoted to digital idea brainstorming, Pepsi made the most of its branding opportunities this year.

For the third year in a row, Chevy was smart enough to key into another need of the weary conference-goer: quick, free transportation. The “Catch a Chevy” promotion unleashed 46 branded Chevy Cruzes and Equinoxes throughout the streets of Austin, offering free taxi-like rides to attendees. An interactive map helped users find the nearest vehicle as well as locate Chevy-sponsored activities.

The premier of Lena Dunham’s HBO series Girls was easily the most talked about event of this year’s SXSW Film. If you happened to make it through SXSW without seeing any of HBO’s Girls promos, you might want to have a talk with your optometrist. Print ads were plastered across Austin; on fences, cement columns and pedicabs. HBO upped the ante by sponsoring a tent with free coffee, bike rentals and WiFi.

2. Can We Network Party Bus

CanWeNetwork hosted SXSW 2012’s first happy hour at Roial and then continued to grab attention with a vibrantly decorated party bus, celeb appearances and an active, integrated Twitter account. The mobile app’s promos may have overshadowed the opportunity to introduce people to its actual product, but it promises that it will be “changing the game” of networking this summer. Only time will tell what exactly the brand has in store, but its aggressive, savvy SXSW promotion was a fantastic start and we’re intrigued.

While we had to give Foodspotting props for its shindig, it would be criminal to glaze over one of SXSW’s biggest and most exercised promotions. Tech brands like Mashable, Squarespace and SalesForce served up free empanadas, burgers and breakfast tacos, while FedEx got in the game with free daily lunches served in shipping packages. Even The Today Show treated festival goers to a full menu of free munchies. Brands showcasing in Austin have figured out that the quickest way to a consumer’s heart is their stomach, and you don’t have to be in the food biz to capitalize on the trend.