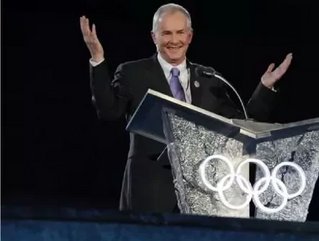 John Furlong, the President, CEO and vision behind the most successful Winter Olympic Games ever staged, didn’t believe in his heart that the organizing committee saw him as a serious candidate for the top position.

Turns out, not many believed his vision was realistic.

One-year after the Vancouver Olympics, Canadians are still talking about those unforgettable 17 days last February. Many believe, Canada is forever changed, for the better.

“On the eve of the interview, there was a movie about the Nagano Games showing at Science World in Vancouver,” says Furlong. “I saw it, came out and sat in my car. I didn’t feel what the higher calling was, so I went and watched it again.”

At the interview, John Furlong expressed how ferociously tough the eight competing countries would be in the bidding process. Touting how great of a city Vancouver is and how great Canada is wouldn’t win the Olympic Games, he opined.

“I told the organizing committee at the interview, ‘if we don’t make the Olympic Games about people and use this opportunity to take the Olympic spirit to the front door of every home in Canada, we will not win the Games,” expressed Furlong.

“There were many people who wanted the Games to be about Vancouver. The decision to make the Games about Canada changed everything. I know a lot of people thought we would have to pull in our expectations. The Games can go far, but only so far, people said. Wrong. They can and did go that far.”

Not long after Sidney Crosby capped the Vancouver Olympic Games with a game-winning overtime goal to give Team Canada Men’s Hockey Gold, Prime Minister Stephen Harper summed up the magnitude of Furlong’s vision:

“The Games have elevated Canada on the world stage. Mark my words, some day historians will look back at Canada's growing strength in the 21st century and they will say that it all began right here, on the West Coast, with the best Winter Olympic Games the world has ever seen.”

John Furlong tapped into the powerful emotion that national pride stirs up. He did it so flawlessly that he was named Canada’s Marketer of the Year by the Canadian Marketing Association (CMA).

“John Furlong’s remarkable ten-year journey building, promoting and executing the Vancouver 2010 Olympic and Paralympic Games changed our nation, galvanized Canadians from coast to coast and showcased Canada to the world. As such, it will serve as a successful marketing model for many years to come,” said CMA President and Chief Executive Officer John Gustavson.

Ultimately, John Furlong raised a record $760 million with 90 per cent of Games’ revenue coming from the private sector. At the height of the global economic recession, John Furlong appealed to the Canadian identity.

John Furlong will be in Vancouver for the Games Anniversary Weekend, February 11-13. He will promote his new book, Patriot Hearts, a behind-the-scenes look at the 2010 Winter Olympic and Paralympic Winter Games and also deliver a few keynote speeches.

“I am going to remind everybody what really took place—how hard it was, the lessons, what we had to do,” explains Furlong.

“When we hold hands and stick together, the country shines. I am going to urge people to recognize this and repeat it. Our champion nation that was on display, that confidence we showed, is a powerful thing. It’s not just for sport. It’s for business. It’s in everything. We need to continue to strive for excellence.”

Read this story in our digital magazine: