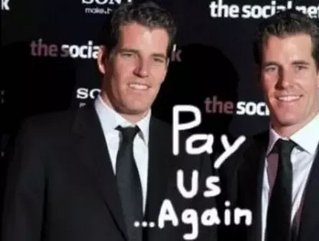 Just a day after we posted a story about the Winklevoss twins finally dropping its Facebook lawsuit, Cameron and Tyler are at it again. Mere hours ago, the twins said they would finally drop their fight with founder Mark Zuckerberg to the Supreme Court and have pushed ahead with another lawsuit.

This time around, a status report filed on Thursday in the U.S. District Court for the District of Massachusetts, the twins, along with business partner Divya Narendra told the court that they would push for discovery in a claim that Facebook “intentionally or inadvertently suppressed evidence” during the original 2008 settlement proceedings. The initial complaint was over whether Zuckerberg stole the idea of Facebook from the Harvard student social media network.

Yesterday’s Massachusetts claim is based on a different legal argument. Instant messages sent from Zuckerberg emerged online last year and gave a glimpse into his relationship with the twins based on the time when he founded the idea behind Facebook in his Harvard door room in 2004. The most recent claim now is that Facebook should have disclosed those communications when they put together the original settlement.

These guys just won’t give up, will they?

Earlier this week, the social media hungry trio, and founders of the social networking site ConnectU, told a California court that they would not pursue an appeal ruling that the 2008 settlement should stand. According to the Wall Street Journal, the men had argued that the settlement should be thrown out because Facebook hadn’t been honest about its own internal value at the time.