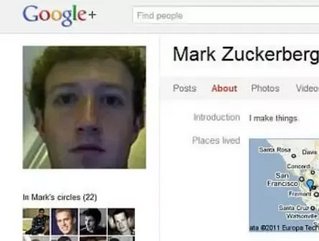 While we’re all upset that we didn’t get a Google+ invite before the new social media website is available to the masses, reports are coming out that the most popular person to follow on Google+ is the one and only, Mark Zuckerberg. I guess it’s not always a bad sign when your chief competitor is the most popular profile to follow when you’re launching your own social media site. Zuckerberg is also on more follow lists than anyone else on Google+.

Zuckerberg has yet to post a public update on the Google+ network and according to PC Mag, he wrote “I make things” under his About section and lists Palo Alto, California as a place he’s lived.

It’s too early to tell if Google+ will be the Facebook killer of our generation, however, we can imagine that because of all of the new bells and whistles – and hopefully fewer privacy issues – donned on the new Google+, fewer and fewer people will be wasting their time on Zuckerberg’s creation. When Google+ gets rid of its invite-only restriction, you better believe we’ll be heading over to the site to see what the big fuss is about. We definitely won’t be shutting down our Facebook pages, but if Google+ is all that it’s cracked up to be, we’ll likely spend more time milling around in Google’s Circles and Hangouts.