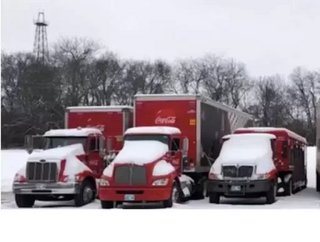 From Apple and American Express to Verizon and PepsiCo, big business is stepping up to the plate providing funds to help support communities in crisis...

With its freezing and devastating conditions, historic Storm Uri has ripped through the deep south, leading to widespread power outages, and creating a humanitarian crisis for communities across Texas and beyond. With transportation impacted and food supplies dwindling, millions of people are living without power, nutrition or running, drinkable water.

As non-profit organisations, including food banks, American Red Cross and The Salvation Army USA work to provide food and shelter for Texas residents impacted, big business has stepped up to the plate, providing non-profits with financial efforts to help them directly support affected communities.

Here are eight American businesses with a history of providing aid in times of disasters who are assisting in Storm Uri recovery efforts.

Walmart has announced that its charitable arm The Walmart Foundation is committing up to US$1 million in cash and in-kind product donations to help with response efforts, with funds going to support Feeding Texas’ emergency response efforts in Houston, San Antonio, Austin, Dallas, the Rio Grande Valley and other areas state-wide, while some funds will support response efforts in Tennessee, Louisiana and Mississippi.

Furthermore, the retail giant has put in place dedicated emergency support teams to help stores get much needed supplies and products in stock and on shelves as quickly as possible. With a long history of providing aid in times of disaster, having donated more than US$58 million in cash/donations since 2017, “we gladly leverage our resources to help these hard-hit communities, and we stand with Texas and all those affected”, states
Dan Bartlett, executive VP of corporate affairs for Walmart Inc.

In partnership with The Salvation Army, PepsiCo is providing some 200,000 meals to Texas residents, along with much-needed aid. The PepsiCo Foundation’s Food for Good nutrition team have delivered 22, 000 breakfast and lunch shelf-stable meals to The Salvation Army, along with a US$200,000 grant to provide a further 190,000 meals to be supplied through its feeding units and directly to families; while PepsiCo Beverages North America (PBNA) is donating nearly 40,000 bottles of Aquafina water to local community organisations. As a member of the Texas community since the 1930s, the company is “committed to helping our Texas employees, partners and neighbours brave this horrific storm”, says Steven Williams, CEO, PepsiCo Foods North America (PFNA).

To help those reeling from the devastating impact of Winter Storm Uri, across Texas, Oklahoma and New Mexico, The Coca-Cola Foundation, the firm’s charitable arm, has donated a US$500,000 grant to help the American Red Cross provide shelter, food and health services in hardest-hit areas along the storm’s path, while the company’s North America Operating Unit has contributed US100,000 and truckloads of bottled water and other beverages to organisations in Texas serving those in need.

Verizon Communications has made a US$250,000 donation to Feeding Texas, a non-profit that supports immediate relief efforts in communities across the state and which will “help them recover and rebuild after a storm has passed”, said Hans Vestberg, CEO of Verizon. The telecommunications giant is further bolstering the efforts of humanitarian crisis charities Red Cross and Salvation Army in supporting those hardest hit, with an initiative whereby Verizon customers can text the word REDCROSS or RESCUE to 90999 or 52000 and US$10 will be added to their Verizon bill and donated to the American Red Cross and Salvation Army USA, respectively.

American Express has committed funds to assist in disaster recovery efforts, with US$100,000 split between American Red Cross and Feeding Texas, the latter helping to fund hunger relief across the state.

Tech giant Apple has announced it is making contributions to local community organisations in Texas and beyond. Via a tweet on February 19, CEO Tim Cook announced that Apple would donate to local relief efforts to aid the state of Texas. “Our hearts are with everyone across Texas and around the US, including many of our team members as they endure the impact of the harsh winter storms,” stated Cook, adding that Apple would indeed be making “a financial contribution to local, community-based organisations to support their relief efforts”.

Through its Foundation, digital bank BBVA USA has announced it will donate US$250,000 to a select group of non-profit organisations working to address the immediate needs of communities, and is further offering customers assistance in the form of payment deferrals and fee waivers through March 31. Not only is the company “committed to working with multiple organisations to help people get the essentials they need to get back on their feet”, states BBVA USA President and CEO Javier Rodriguez Solar, but “we’re also intently listening to the specific needs of our customers as they look for ways to alleviate financial stress during this crisis”.

American food company Smithfield Foods is expediting two truckloads of donations carrying a combined 300,000 servings of protein to Texas foodbanks to support ongoing recovery efforts across the state. Tarrant Area Food Bank of Forth Worth and West Texas Food Bank of Odessa will each receive 37,000 pounds of protein, enough to feed nearly 150,000 people. As a company committed to supporting those impacted by natural disasters, Smithfield’s protein donations will help the Feeding America initiative “meet the impending increased need for food, and we are grateful to support to navigate the difficult road ahead” says Joe Weeden, a director at Feeding America.